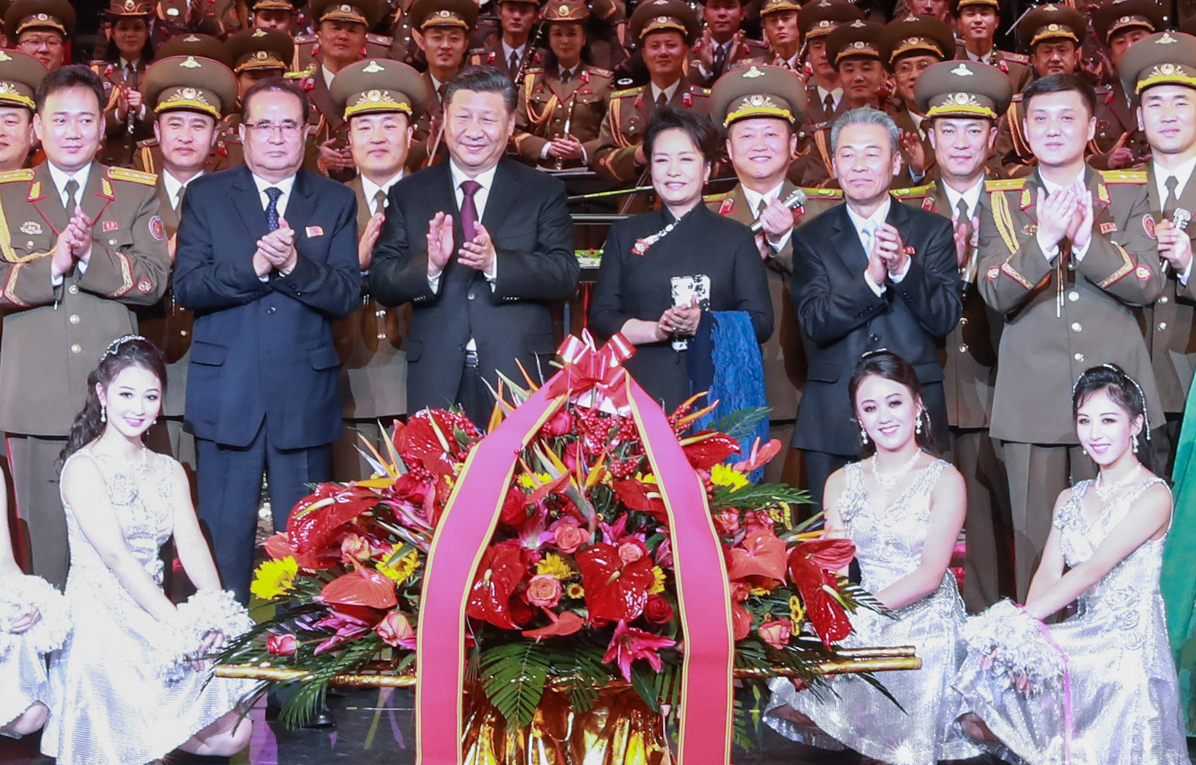 China’s President Xi Jinping and his wife Peng Liyuan, center, pose for a group photo with an art troupe from North Korea after watching their performance in Beijing on Sunday. [XINHUA/YONHAP]

Chinese President Xi Jinping appeared at a North Korean concert in Beijing on Sunday night and met with a high-level official from Pyongyang who led a 280-member delegation for friendly cultural exchanges.

It was the North's second of three concerts in Beijing at the China National Centre for the Performing Arts. The first was held last Saturday without Xi's attendance. The third is scheduled for tonight. Some Beijing sources had said just two concerts were planned by the North Korean performers for Saturday and Monday, but it turned out one more show was squeezed in between those two dates.

Ri led a group of about 280 musicians, singers and government officials who arrived from Pyongyang in Beijing last Thursday.

Xinhua quoted Xi as saying the North Korean delegation's visit to China will be a "great success to cement friendship" between the two countries' peoples, one that comes as this year marks the 70th anniversary of bilateral ties.

"China stands ready to work with the DPRK [Democratic People's Republic of Korea, North Korea's official name] to implement the important consensus reached by the two sides," said Xi, according to an English version of the Xinhua news report, "so as to better benefit the two peoples and contribute to world peace, stability, development and prosperity."

Xi continued that he and North Korean leader Kim Jong-un reached an "important consensus" on the development of party-to-party and state-to-state relations in the new era during their four summits since last year.

The Chinese president called for joint efforts to implement the consensus on strengthening art and cultural exchanges and cooperation to "consolidate the foundation of good will of the people, carry forward traditional friendship and promote the development of respective socialist cultures."

A photo that ran with the Xinhua report showed Xi, Peng, Ri Su-yong, other Pyongyang government officials and North Korean performers on stage posing as a group on Sunday after the show.

The friendship concerts come as Xi is expected to visit Pyongyang some time early this year on the invitation of Kim. Xi's visit to the North could be held before Kim meets U.S. President Donald Trump in late February at a yet-to-be disclosed location, given that Kim often seeks advice from Xi before a major North-U.S. meeting.