Artificial rain isn’t yet the answer to fine dust

Artificial rain isn’t yet the answer to fine dust 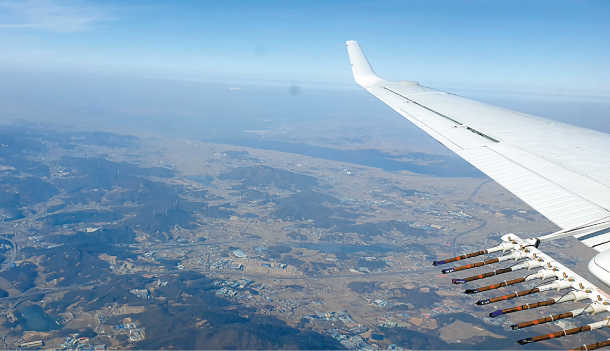 An airplane owned by the Korea Meteorological Administration disperses silver iodide, a chemical that increases precipitation by collecting water vapor, into clouds for an artificial rain experiment over the Yellow Sea on Friday to analyze its effects on reducing fine-dust pollution. [NEWS1]

While the Korea Meteorological Administration’s (KMA) artificial rain experiment to fight fine dust in the air did not yield clear results last week, the KMA said Monday it will continue experiments throughout the year to develop the technology.

“The KMA and the Ministry of Environment cooperated on a project in the Yellow Sea on Friday to find out how much artificial rain can curb the level of fine-dust particles in the air,” the KMA said in its statement Monday. “From what we’ve found out, the particles in the cloud thickened after the cloud seeding experiment, but there was no visible rainfall.”

The KMA flew an aircraft some 110 kilometers (68 miles) northwest of Yeonggwang County in South Jeolla at around 10 a.m. Friday, seeding the cloud with rain-inducing iodide.

“There was a weak mist detected from the coast of the county around 12:50 p.m.,” the KMA said. “While we were able to see that the cloud thickened after the experiment, how much of an impact the experiment had on bringing about the mist will have to be analyzed further.”

More analysis of the experiment will be announced at the end of February, the KMA said. Through 2019, the KMA and the Environment Ministry plan to run at least 15 more experiments on artificial rain.

The experiment was conducted for the first time Friday to find out if the technology can be developed further to curb the level of fine dust particles in the air.

Korea has been experiencing higher levels of fine dust in recent years. On Jan. 14, the average PM2.5 level across Seoul, Incheon and Gyeonggi hit 122 micrograms on Jan. 14, the highest it has been since 2015, when the Environment Ministry started collecting data on fine dust.

PM2.5 particles are particles less than 2.5 micrometers in diameter, about 30 times smaller than the width of a human hair.

The World Health Organization (WHO) describes them as carcinogenic since PM2.5 particles can travel through the respiratory tract and reach the bloodstream, causing lung cancer and other lung conditions, as well as heart conditions and stroke.

The WHO recommends daily exposure of no more than 25 micrograms of PM2.5.

Artificial rain was one solution proposed by the government.

“In order to find out if artificial rain technology can be used to fight fine dust in the air, we need to conduct further experiments under various conditions,” said Kim Jong-seok, head of the KMA.

“The latest experiment, regardless of its success, has helped us collect new data on the technology, which may be used to its full potential in the future.”