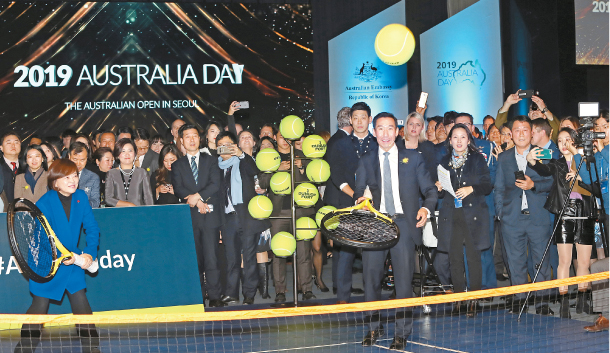 Australian Ambassador to Korea, James Choi, right, and Korean Minister of Gender Equality and Family Jin Sun-mee, left, play an exhibition game of tennis on a mini court set up for the 2019 Australia Day celebration at the Grand Hyatt Seoul in central Seoul on Friday. The celebration this year was held under the theme “Australia Open,” which sought to highlight not only the tennis tournament and its impact on bilateral relations but also the Australian values of diversity and inclusiveness, according to the embassy. Ambassador Choi also appointed on Friday actors Ryu Su-young and Park Ha-sun, who joined the celebration, as goodwill ambassadors of Australia. [PARK SANG-MOON]