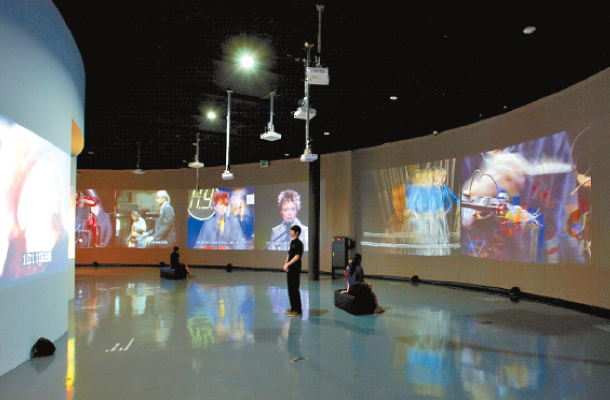 Through Sunday: This exhibition, held to celebrate the 10th anniversary of Nam June Paik Art Center, features works from 13 teams of artists, including a spectacular TV installation “Elephant Cart” by Nam June Paik, dubbed the father of video art, and works by another important artist, Joseph Beuys, who was a friend of Paik’s.

The exhibit also includes works by Rimini Protokoll, Ahn Kyuchul and other artists, all of which are based on Paik’s concept of “Commons.”

The artist wanted to create a common video market where information could be actively exchanged and distributed via free video communication.

Admission is free. The museum is closed on Mondays. Take bus No. 5000 or 5005 from Seoul and get off at the Singal five-way intersection in Yongin.

Through Saturday: This latest exhibition at the Horim Museum allows visitors to artistically compare buncheong ware, greyish-blue ceramic covered in coarse white glaze, from the past with that of the present. Two techniques of decorating buncheong ware are introduced, including the so-called Dumbung technique - which involves simply dipping the vessel in white clay - and the Gwiyal technique - which involves decorating the surface with white using a coarse brush. About 70 pieces of Buncheong ware from the Joseon Dynasty (1392-1910) are on display, while there are about 50 modern works by nine artists using the two techniques.

Admission is 8,000 won ($7). The museum is located near the Apgujeong Rodeo Station on Bundang Line, exit 5 and walk for about 10 minutes.

ART OF THE KOREAN EMPIRE: THE EMERGENCE OF MODERN ART

Through Feb. 6: The exhibition sheds light on the art of the Korean Empire, which lasted only 13 years (1897-1910). The art of this period has largely been ignored as a dark historical era that led to the country being colonized by the Japanese for the next 35 years. However, the museum believes this period also laid the foundations for 20th century Korean art.

The exhibit displays some 200 works of art from the period, including royal paintings, such as a portrait of Emperor Gojong (1852-1919) depicting him in a golden robe that symbolizes imperial status. The royal court artworks from this period also show Western realism and Japanese decorativeness as Emperor Gojong emphasized modernization by accepting such outside influences.

The museum is located inside Deoksu Palace. Admission is 2,000 won for adults, but is free during the Feb. 4-6 Lunar New Year holiday.

Through Feb. 6: The retrospective of Yun Hyong-keun (1928-2007) features his famous paintings hovering between Western abstract painting and East Asian ink calligraphy. Additionally, there are also his paintings, drawings and materials that reveal little-known aspects of the well-known painter who belonged to the 1970s and ’80s movement of dansaekhwa, or Korean monochrome paintings.

The exhibition shows a reproduction of Yun’s actual atelier, which includes works by his teacher and his father-in-law, Kim Whanki (1913-1974), and by American minimalist Donald Judd. Yun and Judd respected and bought one another’s works.

Admission is 4,000 won for adults and covers other exhibitions at the MMCA Seoul, including the solo shows of Choi Jeong-hwa and Marcel Duchamp. Admission is also free on Feb. 4 and 6 to celebrate the Lunar New Year holiday. The museum is closed on Feb. 5. Go to Anguk Station, Line No. 3, exit 1 and walk for 10 minutes. 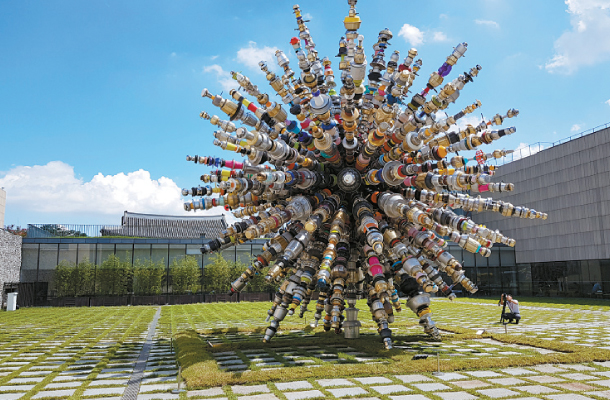 To Feb. 10: Choi Jeong-hwa, 57, one of the most internationally renowned Korean artists, is famous for piling up daily objects made of cheap plastic - such as plastic baskets of vivid colors found in Korean and other old-fashioned Asian markets - in inventive ways and on an expansive scale, so the viewer feels aesthetic pleasure to the point of sublimity.

For the new exhibition, the objects he uses go beyond plastic, ranging from wooden antique candlesticks from Korea’s Joseon period (1392-1910) to English cauldrons of iron, wooden chairs from Africa, Chinese rubber shoes and modern frying pan handles to build 146 small and large columns. Together, these sculptures are called “Blooming Matrix” and are arranged in rows in a gallery of the MMCA Seoul. They might remind a viewer of a primitive shrine full of cairns or totem poles.

The information for visitors to the MMCA Seoul was mentioned above.

Through Feb. 10: The ninth Seoul Photo Festival, entitled “Brave New World,” looks at how human beings have adapted to the changing environment, especially to the development of science and technology.

Admission is free. The museum is open through the Lunar New Year holiday. Get off at Junggye Station, Line No. 7, exit 3 and walk five minutes.

Through Feb. 10: The solo show of Noh Sangho, 32, who is best known for making the album cover art for indie band Hyukoh, features a vast collection of paintings - 1,500 pieces in total - at the Underground Gallery in Arario Museum.

Most of the works are A4-size paintings, which the artist painted daily based on images he encountered on the internet.

The highlight of the exhibit are 2.7-meter (8.86-foot) tall paintings he created by combining the images of his everyday paintings.

Admission is 10,000 won for adults, which covers the entire museum.

It is closed on Feb. 4 and 5 for the Lunar New Year holiday, and will be open on Feb. 6. Go to the Anguk Station, Line No. 3, exit 3 and walk for three minutes.

To March 31: The exhibition looks at the world of Cubism, from its birth in 1907 to its later development. The 90 works by 20 artists, including those by Pablo Picasso (1881-1973) and Georges Braque (1882-1963) who together invented Cubism, have been taken from the contemporary art section of the Museum of Modern Art of City of Paris.

The exhibition begins with two paintings by French post-impressionist painter Paul Cezanne (1839-1906), who inspired both Picasso and Braque.

The second part of the exhibit looks at the beginnings of Cubism by the two geniuses. The third section displays works by following cubists who took on Picasso and Braque’s mission and added their own colors to it, especially Robert Delaunay (1885-1941) and Fernand Leger (1881-1955). Finally, the last section features four large-scale paintings by Robert and Sonia Delaunay for the Salon des Tuileries in 1938 and which have traveled outside of Paris for the first time for this Seoul exhibition.

To April 7: The largest-ever retrospective of artist Marcel Duchamp (1887-1968) in the Asia-Pacific region has been co-organized by the Korean museum and the Philadelphia Museum of Art, which has the world’s largest collection of Duchamp’s works.

The Korean exhibition features about 150 pieces from the U.S. museum, including the most famous - or notorious - “Fountain” and other Duchamp ‘readymades.’ He chose a ready-made urinal, signed the pseudonym “R. Mutt” on it and displayed it under the title “Fountain.” He said he “took an ordinary article of life, placed it so that its useful significance disappeared under the new title and point of view - created a new thought for that object.”

The exhibit also includes the only Duchamp work in the MMCA collection: an edition of “Box in a Valise.” This is a portable set of miniature reproductions of Duchamp’s selected works for which he designed and controlled their production and distribution. Another edition from the Philadelphia Museum is on display next to the MMCA’s edition, making a spectacular view.

The information for visitors to the MMCA Seoul was mentioned above.