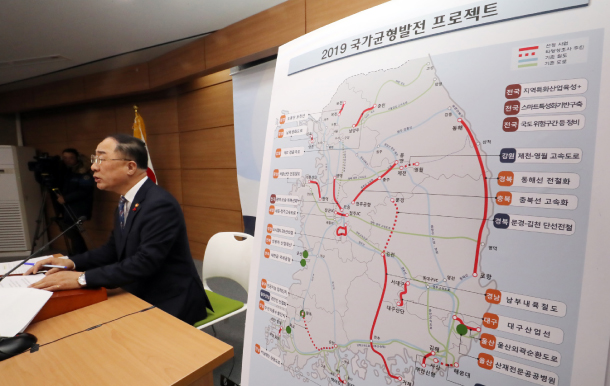 Finance Minister Hong Nam-ki explains infrastructure projects that will be exempted from feasibility studies Tuesday at the government complex in Sejong. [YONHAP]

While the government insists the waivers are meant to boost local economies and balance development across the country, some analysts say it’s pork barrel spending ahead of a general election next year that could lead to enormous waste.

On Tuesday, the Finance Minister Hong Nam-ki announced the projects that were given the green light without having to go through a government review on feasibility that determines whether a project makes economic sense and forecasts its efficiency and impact.

A total of 32 projects were proposed by 17 local governments with an estimated cost of 68.7 trillion won.

The government sold its decision as a way of bringing development to areas outside Seoul. It did not accept Seoul’s proposed expansion of the Dongbu expressway, which would have cost as estimated 410 billion won.

The government said it selected projects that could immediately be executed while also focused on areas like Geoje, Tongyoung, Ulsan, Gunsan and Mokpo, whose traditional manufacturing industries like automobiles and shipbuilding are in major slumps. 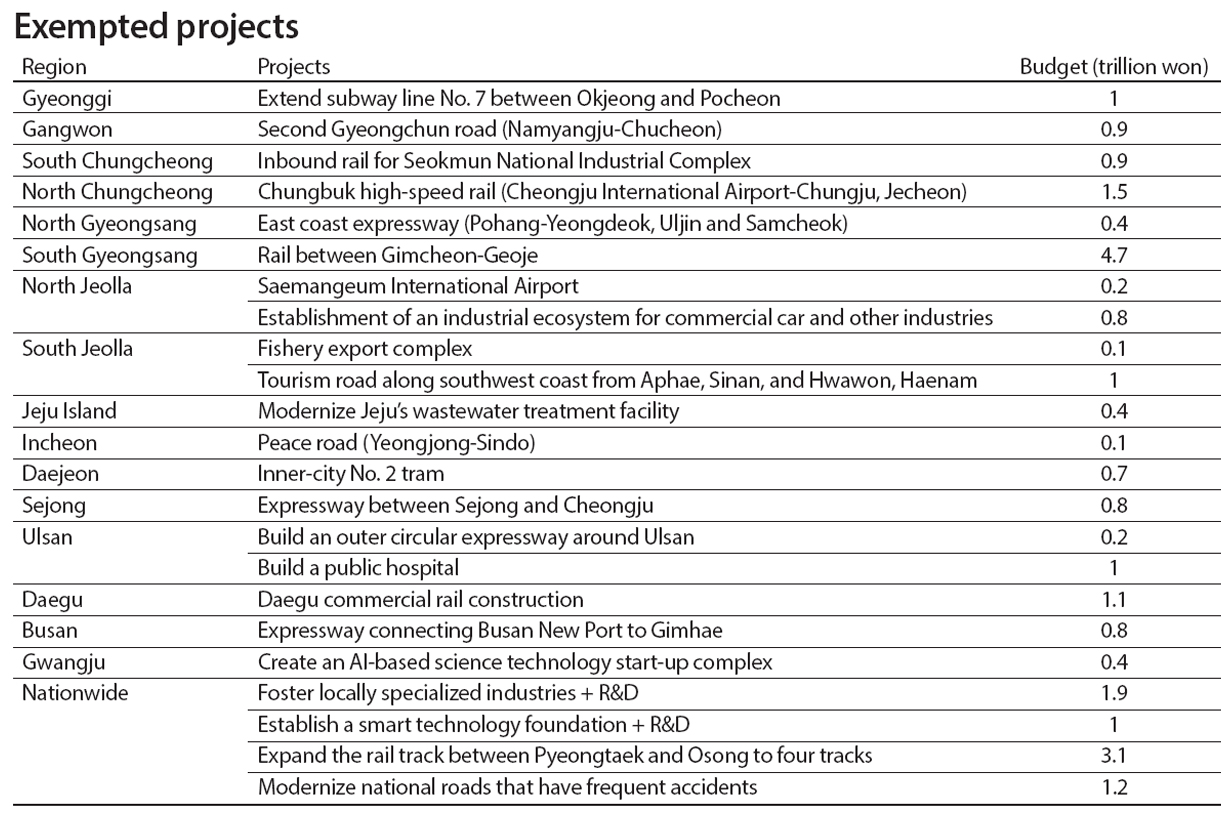 In a separate announcement, the government announced a broader investment plan aimed at easing the development gap between metropolitan cities and rural areas.

The Presidential Committee for Balanced National Development and the Ministry of Trade, Industry and Energy also on Tuesday announced that the government will be investing 175 trillion won through 2022 on national balanced development projects.

The central government will be investing 112.9 trillion won or 64.6 percent while the rest will be covered by the local government and the private sector.

The projects include investing 51 trillion won on improving education, welfare and culture, including setting up 450 public daycare centers every year for the next five years, providing financial aid to 3,600 young people applying to small and medium-sized companies, and providing subsidies for public institutions that have relocated to rural areas to expand their hiring of local talents.

It also includes spending 66 trillion won on smart farms and other projects that will help attract people to farming and fishing neighborhoods as well as setting up innovative centers in small cities for the same purpose.

The Moon government stressed early on that it would follow the past two conservative administrations, which relied on civil engineering projects to boost jobs and the economic growth.

Its attitude changed this year came after it faced harsh criticism over its disappointing job numbers and slowing economic growth.

Last year, the new jobs added was the smallest number since 2009, when the economy was slammed by the 2008 global meltdown. The unemployment rate is at its highest rate in 17 years, while the economy grew at its slowest pace in six years in 2018, 2.7 percent.

The Bank of Korea last week lowered its outlook for this year’s economic growth to 2.6 percent, down from a 2.7 percent projection made in October.

According to the Citizen’s Coalition for Economic Justice (CCEJ), the Lee Myung-bak administration, which became infamous for deeply flawed infrastructure projects, including a barely used Formula 1 track, waived feasibility studies on 88 projects whose total construction costs amounted to 60 trillion won.

Since taking office two years ago, the Moon government exempted 38 projects with a total budget of 29.6 trillion won. When including the ones approved Tuesday, the Moon government now comes in second after the Lee administration for infrastructure projects that don’t go through feasibility studies in terms of cost at 53 trillion won. The numbers of projects his administration has waived feasibility studies for is now 61.

Lee was nicknamed the bulldozer since he was the head of one of Korea’s biggest construction company, Hyundai E&C, and was also responsible for the Cheonggye river restoration when he was Seoul’s mayor.

“Construction investment is a factor that could directly raise economic growth,” said Ju Won, a Hyundai Research Institute chief economist. “It also has a huge effect on industries in creating jobs.”

Finance Minister Hong said the waiver of the studies is different from the four rivers restoration project pursued by the Lee Myung-bak administration, stressing that Moon’s projects are not intended to boost the economy in the short term but are projects with long-term visions that will bring about balanced developments in rural areas.

“The difference in the projects announced today,” Hong said, “is that we aren’t only limited to infrastructure construction but includes projects that are contributing to fostering strategic industries and improving the quality of life of the people living there.”