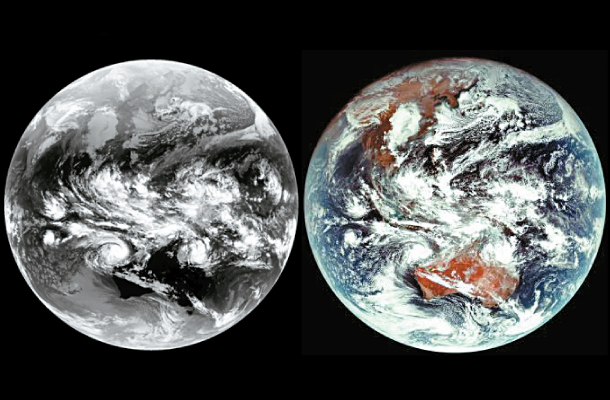 According to the Ministry of Science and ICT, the satellite shot its first image of Earth and sent it to the Korea Aerospace Research Institute and the National Meteorological Satellite Center on Saturday.

The image from Chollian-2A was in color, unlike the black and white images captured by its predecessor, the Chollian-1. The Science Ministry said it could check the type of terrain on areas not covered in cloud through the image. Parts of Australia and China that are desert appeared to be more red-colored than other areas due to the sand. The ministry said it also spotted a tropical cyclone headed west from around Australia.

Image transmission comes about a month after the satellite, also known as the Geo-Kompsat-2A, reached its targeted geostationary orbit of 36,000 kilometers (22,369 miles) above the Earth’s equator on Dec. 21. It took roughly 17 days for the Korean satellite to get to the intended orbit after launch on Dec. 5 from a space center in French Guiana.

The 2A will send weather information to ground stations in Asia from July after six months of testing, according to the Science Ministry.

The Chollian-2A is one of two follow-up satellites to the Chollian-1, Korea’s first geostationary satellite launched in June 2010. While the first satellite was used to monitor weather and ocean color, the 2A will focus on monitoring space and terrestrial weather and the Chollian-2B will later check oceans and the atmospheric environment around the Korean Peninsula.