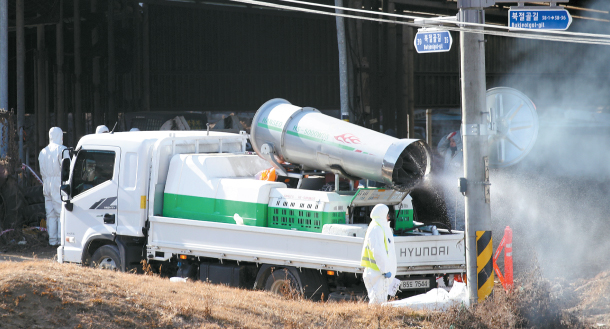 A fumigation truck sprays disinfectant in Anseong, Gyeonggi, on Tuesday at the site of a confirmed outbreak of foot-and-mouth disease. [YONHAP]

The Agriculture Ministry confirmed Tuesday an outbreak of foot-and-mouth disease at a dairy cattle farm in Anseong, Gyeonggi, and is taking decisive measures in response ahead of the holidays.

Test results Tuesday showed that cattle at the farm contracted a type O variant of the highly-infectious disease, according to the Ministry of Agriculture, Food and Rural Affairs.

This is the first outbreak of the viral disease this year.

Suspected cases were first reported Monday. The ministry decided to cull 120 cattle at the farm that day and placed a 24-hour standstill order on cattle and related transport until 8:30 p.m. Tuesday in and around Anseong.

Prime Minister Lee Nak-yon called Tuesday for a quick response to contain the disease, especially ahead of the travel rush during the Lunar New Year Holiday period next week, when many families travel around the country to visit relatives.

“Foot-and-mouth disease may spread during the Lunar New Year holiday if there isn’t a strong early response to contain it,” the disease, Lee said. “There needs to be decisive and swift early quarantine measures that might even seem to be excessive.”

The government was vaccinating 4,900 hoofed animals at 89 farms within three kilometers (1.86 miles) of the outbreak on Tuesday. It plans to complete vaccinations in the near future on 440,000 hoofed animals in Anseong and 1.39 million pigs and cattle in adjacent provincial areas.

Authorities said no symptoms of the disease were found at nine other farms within 500 meters (1,640 feet) of the outbreak and at 23 other farms visited by milk collection vehicles in the nearby region. Quarantine measures will be in place on these other animals pending the results of the blood tests.

The disease has an incubation period of up to 14 days. The ministry explained that quarantine measures over the next three weeks are key to containing the disease and added it will take further preventative measures by sterilizing livestock farms and related facilities nationwide.

Additional reports of possible infection in Anseong were reported Tuesday.

The infectious viral disease that affects hoofed animals causes high fever and is accompanied by blisters, usually near the mouth and the feet. Foot-and-mouth disease outbreaks have resulted in mass culling in the past.

More than 900 pigs were culled in March last year due to an outbreak in Gimpo. In 2016, over 30,000 animals were culled due to the disease, according to a report from the Agriculture Ministry acquired by the office of lawmaker Son Kum-ju.