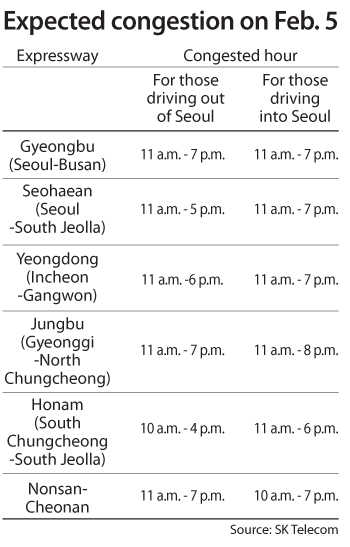 Years of big data analysis allows Korea’s top navigation apps to offer tips and advice for drivers hoping to avoid the traffic over the Lunar New Year holiday. Unfortunately, they disagree on pretty much everything.

SK Telecom, operator of the T Map navigation app, said it’s better to leave Seoul before 7 a.m. on Saturday through Monday. The three-day Seollal holiday begins on Monday, Feb. 4, but a lot of people are likely to start heading out of the capital area over the weekend.

The mobile carrier warned that if drivers decide to leave Seoul in the afternoon, it will take roughly six hours to reach Busan and five hours to Gwangju on any of the three days from Saturday.

Each journey will take about one hour and thirty minutes more than the same trip in the early morning.

The most congested time of the day will be around 2 p.m., the mobile carrier said.

Next Tuesday, Lunar New Year, is expected to be congested all day for both drivers going in and out of Seoul. Traveling between Seoul and Busan at noon will take more than eight hours that day, according to SK Telecom.

The projection is based on big data accumulated by T Map, an app SK Telecom says has 11 million monthly active users, over the last five years.

The mobility arm under chat app operator Kakao said it’s best for drivers to leave Seoul between 7:30 p.m. and 9 p.m. on Monday.

Traveling from Seoul to Gwangju will be roughly an hour faster if drivers leave after 8 p.m., Kakao added.

Unlike SK Telecom, Kakao project road congestion will peak at 5 a.m. and 3 p.m. on Monday for drivers moving out of Seoul.

For those coming back to Seoul from Busan, Gwangju, Daegu, Daejeon and Ulsan, Kakao recommended starting the journey after 9 p.m. on Tuesday.

At noon, it will take 7 hours and 30 minutes to get from Busan to Seoul, but for those leaving at 10 p.m., it will take only five hours, the tech company said.

Journey times from Gwangju to Seoul will also be cut by about an hour and a half when drivers leave at 9 p.m. compared to departing at midday.

Jeong Yeon-ju, navigation team leader at Kakao Mobility, recognized the possibility that the recommended times could end up congested if too many people follow the app’s traffic projections. The company has a plan to avoid that.

“Route offerings will be updated in real-time based on big data collected from its users and taxi drivers during the actual holiday period so that drivers are guided to less congested roads,” said Jeong.