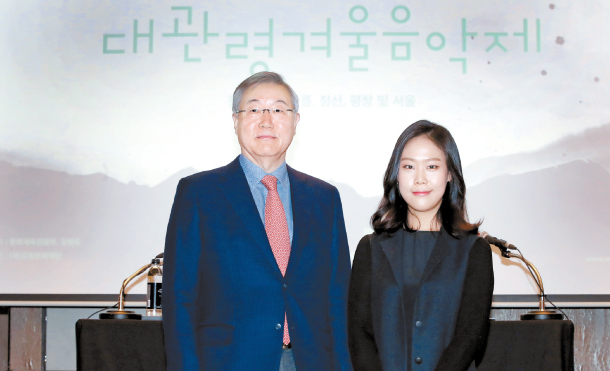 Around this time last year, Pyeongchang and Gangneung in Gangwon were packed with people from all over the world for the 2018 Winter Olympic Games. It may not be as bustling as it was last year, but artistic director Son Yeol-eum of the annual Great Mountains Music Festival is hoping to attract both local and international visitors back to the region known as Daegwallyeong, or the Great Mountains, once again for the winter edition of the country’s biggest classical music festival.

Since the festival itself was established in 2004 as part of the effort to win the bid to host the Winter Olympic Games in the region, the fate of the music festival, which is held each summer and winter, was unknown after the Games ended. But pianist Son, who was appointed early last year to head the festival, successfully pulled it off last summer and managed to maintain the budget to hold the biannual event for several more years. This year’s Great Mountains Winter Music Festival will be held from Feb. 7 to 16 at various venues in Gangwon as well as one concert for Seoulites at the Seoul Arts Center in southern Seoul.

“Gangwon has the will to continue with this festival as a legacy project to commemorate the Olympic Games,” said Kim Sung-hwan, chairman of the Gangwon Art & Culture Foundation. “We do have the summer festival which is bigger in size, but because we’ll continue to hold the winter edition during the time when the Olympics were held - it will really be like a celebratory festival.”

If the summer festival is focused more about presenting pure classical music, starting this year, the winter edition, according to Son, will be focusing on more experimental performances. For example, some of the artists that Son managed to invite include Melodica Men, a musical duo that play melodeons. The duo, made up of Joe Buono and Tristan Clarke are also popular on YouTube, and some of their videos have more than 3 million views. In fact, YouTube is where Son first encountered the duo.

“I have always hated how classical music gets perceived as this old European music from 200 years ago,” said Son. “So when I became the artistic director, important key words for me and the festival became ‘here’ and ‘now.’”

“I believe classical music, although it is from centuries ago, still breathes with us and can still be attractive and enjoyed in diverse ways by all age groups, and I thought one of the ways to show that was through artists like Melodica Men.”

Son says she has always been interested in innovative artists trying different ways to present classical music. She’s been making a list of those artists whenever she encountered them, and Melodica Men made that list.

“They just grabbed my attention,” said Son. “They were not just refreshing and never been introduced in Korea, but very talented and have great rearrangement skills. So, I got curious to know what it would be like to see them perform live.”

Another group Son wanted to introduce during the festival is The 5 Browns, a piano ensemble composed of five siblings - two brothers and three sisters. The siblings all studied at the Juilliard School and have hit classical records.

“I also got to know them through YouTube and I was mesmerized,” said Son. “One piano is enough to wow me but putting five pianos in one place, and they create totally new music.”

Since Son’s appointment, the summer and winter festival’s lineups have become much younger compared to her predecessors Chung Myung-hwa and Chung Kyung-hwa. Son explained that while she wants to show more innovative sides to classical music, she is also willing to invite legendary classical music virtuosos to the festival as well.

“I want to keep the balance,” she said. “I believe we are flooded with classical music concerts these days, so I didn’t want to make this festival like one of those. I wanted to differentiate it from other festivals and concerts, and to do that, I want to show innovative artists, not just new faces but very talented new faces.”

There will be six main concerts during the festival and three free “Outreach Concerts” in Wonju, Chuncheon and Jeongseon County as well. Son will also perform during some of the concerts. For more information, visit www.mpyc.kr or call (033) 240-1363.