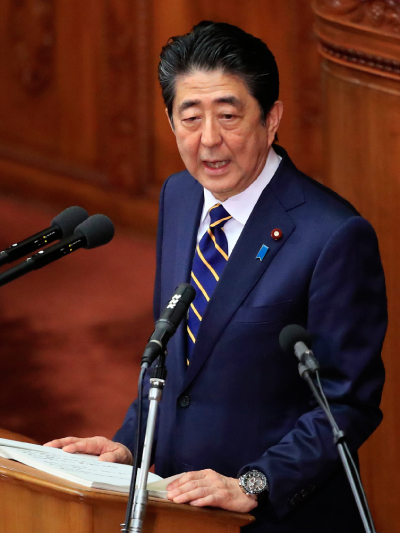 Japanese Prime Minister Shinzo Abe omitted nearly all mention of South Korea in his yearly foreign relations address to Japan’s Diet on Monday, a testament to how acrimonious the two countries’ relationship has become over historical issues and a series of recent military contretemps.

The Korean Peninsula only received a passing mention in the Japanese premier’s speech, with emphasis on North Korea.

“We will wash away the unfortunate history with North Korea and make normalization of relations [with Pyongyang] an objective,” Abe said in the 11-minute speech. “To do so, we will coordinate closely with the international community, including the United States and South Korea.”

Japanese local media attributed the ignoring of South Korea to a rapid deterioration of ties between the two countries over a series of recent disputes involving a Korean warship’s alleged use of military radar on a Japanese plane and low-altitude buzzings of Korean naval vessels by Japanese aircraft.

The omission was particularly jarring given the fact that the address dealt with a full spectrum of Japanese foreign relations issues like its alliance with the United States, improvement of relations with China and territorial negotiations with Russia. Abe even discussed relatively minor issues such as Japan’s aid to African countries and its role in helping foster peace in the Middle East.

While Abe briefly added that he would work to strengthen “neighborly diplomacy” to make “Northeast Asia a land of peace and prosperity,” he did not specifically state whether Seoul was part of that calculus.

Abe has brought up the relationship with Seoul in every yearly foreign policy address since he returned to power in December 2012, modulating his references to Japan’s closest neighbor in these speeches in accordance to the state of their relationship that year.

In his first address of this kind in January 2013, Abe underscored Seoul’s role as the “most important neighbor [with which Japan] shares fundamental values and interests like freedom and democracy.”

A fixture in his references to South Korea in every address since was the establishment of a “future-oriented” relationship between the two countries - reflecting Japan’s wish to get beyond historical disputes related to its annexation of Korea and tragedies related to World War II, like women forced into sexual slavery and people forced to work for Japanese companies.

Even after President Moon Jae-in came to power in South Korea in May 2017 promising to scrap the Park Geun-hye administration’s controversial agreement with Japan over the sexual slavery or “comfort women” issue, Abe promised to strengthen “future-oriented” ties with Seoul based on the “international promise” made between the two countries - a reference to the agreement.

Last year, the Moon government pulled the plug on a joint fund meant to compensate the women subjected to sexual slavery during World War II, a major part of the agreement. Tensions were further inflamed when Korea’s top court ruled in favor of Korean plaintiffs in a damages suit against Japanese companies that forced them into labor during the war.

These developments, as well as the military disputes, have proved in Tokyo’s eyes that Seoul lacks a “future-oriented” perspective, according to top Japanese officials in a report by the Asahi Shimbun from Tuesday.

One Korean diplomatic source in Tokyo told the JoongAng Ilbo that he sees no willingness on Japan’s part to repair ties with Seoul, saying that the omission of references to South Korea can only be seen as a deliberate snub since the speech customarily deals with optimistic elements in Japan’s foreign policy.

“Since Abe has already reaped the benefits of rising poll numbers [as a result of the disputes with Seoul], he may not have felt the necessity to mention South Korea any further,” he said.

Some media outlets in Tokyo saw Abe’s speech as a tit-for-tat response to Moon’s lack of reference to Japan in his New Year’s address on Jan. 10, which some Japanese media interpreted at the time as a lack of interest on South Korea’s part in improving relations with Japan.

The road ahead looks even rockier for the two countries’ relationship. March 1 is the centennial of a massive uprising against the Japanese colonial government in 1919.

“It remains to be seen how Abe will deal with calls by Japanese legislators to respond harshly towards Korea in the regular parliamentary session while anti-Japanese sentiment in Korea builds up in the lead up to the March 1st anniversary,” said one Japanese government source.