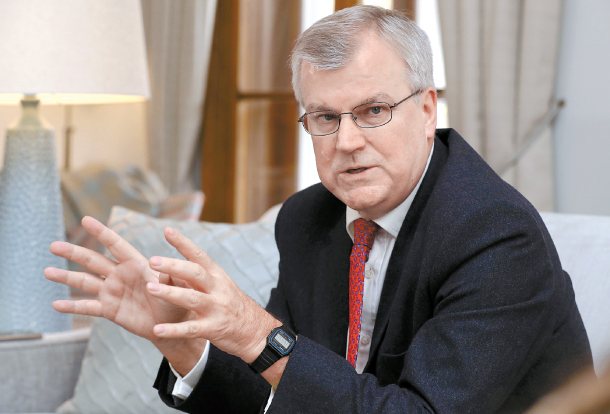 Simon Smith, the British ambassador to Korea, sits for an interview at the Embassy of the United Kingdom in central Seoul on Jan. 22. [CHOI SEUNG-SIK]

Simon Smith, the British ambassador to Seoul, assured Korean football fans that they will continue to be able to watch TV broadcasts of Tottenham Hotspurs’ Son Heung-min playing in the English Premier League, despite the possibility of a messy Brexit.

As he sat for an interview with the JoongAng Ilbo at the British Embassy in central Seoul on Tuesday, Smith noted that there is still a possibility of a no-deal Brexit in which the United Kingdom exits without a deal with the European Union. Britain’s scheduled departure date from the EU is March 29.

It is possible that a no-deal Brexit could impact the broadcasting right of English Premier League club, regulated by the Korea-EU free trade agreement (FTA).

However, Smith said that Britain is working to avoid a no-deal situation and for a seamless transition to a Korea-U.K. FTA.

That is why it is important, said Smith, that Korean President Moon Jae-in and British Prime Minister Theresa May agreed that “there should be no gap between the time that Britain stops being a party to the EU-Korea FTA and the time that new free trade arrangements between the United Kingdom and Republic of Korea take effect.”

Smith added that the British government prioritizes signing a bilateral FTA with Korea, describing it as a part of the “champion’s league of free trade agreements.”

Smith is an Asia and denuclearization expert who previously served as British ambassador to Austria and the Britain’s governor on the Board of the International Atomic Energy Agency (IAEA). He is proficient in Korean and also served as the former head of the British Foreign and Commonwealth Office’s Northeast Asia and Pacific Department.

Q. How high is the possibility of a no-deal Brexit?

What can we expect next?

There are only two ways to avoid there being a no-deal situation. One is to say we’re not leaving after all, so we take back our notification of Article 50 [of the Lisbon Treaty]. Our prime minister [Theresa May] has said we’re not going to do that. The second way is for parliament to approve a U.K.-EU withdrawal agreement. What happens if the withdrawal agreement is approved is that it that it confirms that Britain will leave the EU on March 29 of this year. But under the agreement, what then happens is a further period of 21 months in which Britain’s relationship with the European Union will remain pretty much the same as it has been as a member. But we enter what is called in the withdrawal agreement the implementation period, or right to understand as the transition period. One of the key things about the transition period is that it means Britain remains subjects to all the machinery of the single market in the European Union.

What that means, in turn, is that until the end of the implementation period, which is Dec. 31, 2020, Britain’s trading relationships with countries outside the European Union will also remain where they are. So they’ll remain stable and in place and continuous.

Will a no-deal Brexit cause any problems on trade with Korea?

As long as no deal remains a possibility, and if we do not do our work on time to make sure that we are ready to continue our free trade agreements, then, yes, we have a bit of a problem. I’m sure whatever happens, that if there is a gap - which as I said I don’t think there will be - but if there is, I’m sure we will work to make sure that it is a short one.

In the longer term, I’m sure the focus on both sides would be saying that we’ve had some good results from the EU-Korea FTA; we’re confident that a successor agreement between the U.K. and the Republic of Korea will allow us to continue that progress; but in addition, we will also be looking at other areas where we can expand our range of cooperation. About the prospects and openings about Korean exporters to sell into the U.K. market, provided we have a free trade agreement in place, one, there will be no interruption to that. Two, Korean exporters and investors can be absolutely, 100 percent confident that Britain is going to remain a market that is absolutely open to competitive exports wherever they come from.

That list of countries is not massive - my memory tells me it’s about 40 countries. In some ways I don’t mind how long that list is because I know that Korea is a very high priority … There will be what I call a champion’s league of free trade agreements which we will want to focus on at the same time, and I’m confident that Korea will be among those. That confidence is evidenced by the fact that on both sides there is a very strong conviction that we should work very hard to ensure continuity - ensure no gaps between the EU-Korea and the U.K.-Korea FTAs. That’s a signal that this is something we want ready to go right from the outset.

Does Britain have any plans to engage with North Korea?

The two current major players are the Republic of Korea and United States. We are a permanent member of the UN Security Council, and in that capacity, we regard the [Democratic People’s Republic of Korea, or DPRK,] nuclear question as a question which clearly has implications for global security, and in that sense, we will continue to play a very active, responsible and creative role to support the efforts to make sure that whatever we do with North Korea is indeed improving and enhancing global security.

It’s absolutely right we are supportive but not interfering in the efforts principally undertaken by the ROK and the United States to continue to explore whether the opportunities that arose last year can be converted into real gains in terms of addressing concerns about North Korea’s nuclear program, but also, in a wider sense, if these efforts can be converted into a situation in which North Korea is successfully encouraged to engage collaboratively and cooperatively with the international community. What 2018 showed us was that it is possible to judge that there is appetite for change in the DPRK.

As a nuclear expert, are you optimistic about the ongoing North Korean denuclearization process?

I remain pretty hopeful that there is room for a lot of progress. I’ve always taken the view that if you want to address these questions seriously and get a result, then one of the things you need is staying power and patience. Having been involved in how you address these sort of nuclear challenges in various contexts in the past, whether it’s been North Korea or Iran, it is very clear that you do need to build a certain amount of willingness to trust the other partner before you can make progress - and that takes time and patience … I remember very clearly that a part of the rationale for our establishing relationships with North Korea was to say: It is time we stop just talking about North Korea and start talking to Korea.