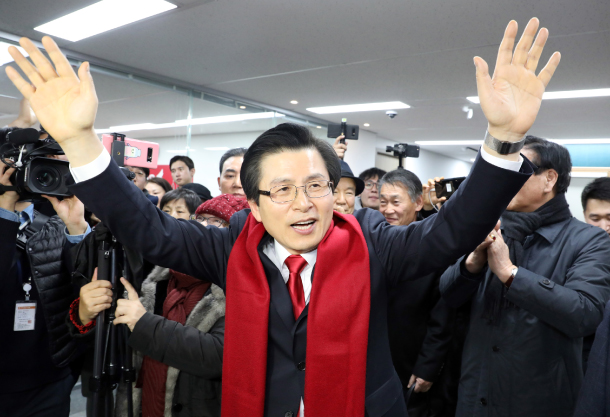 “I will put my life on the line to save the country and the people,” Hwang said at the LKP headquarters in western Seoul, where he announced his candidacy for the party’s leadership race in February. “I will revive a [South] Korea at risk of regressing into the past.”

The former prime minister, who topped polls released Tuesday as the leading presidential hopeful in South Korea, pledged he would lead the conservative LKP to victory in the 2020 legislative elections.

It is widely believed Hwang’s bid for the party leadership is a stepping stone to launching a more important campaign - a presidential run in 2022.

Hwang briefly served as acting president after former President Park Geun-hye was impeached by the legislature in December 2016 and tried by the Constitutional Court the following year.

“The philosophy of the 386-student movement, which should be in the grave, is dominating Korean governance in the 21st century,” he said, referring to the generation of student activists who fought against the authoritarian governments in the 1970s and ’80s, and now hold key positions in politics and government. “An antiquated leftist economic experiment known as ‘income-led growth’ has become the dogma of this government.”

Hwang went on to claim “militant, patrician labor unions” in league with the Moon government are blocking labor reform, stealing the youth’s jobs and robbing the income of workers at small- and medium-sized businesses, while “the people’s lives have fell into hell.”

He continued, “those who praise North Korea and [its leader] Kim Jong-un have taken over Gwanghwamun square, and those who fell for [the North’s] Juche ideology in the ’80s now dominate the Blue House and National Assembly.”

Hwang’s reference hearkens back to the rhetoric typically used by right-wing parties in Korea to attack their liberal counterparts, such as Moon’s former chief of staff, Im Jong-seok, who violated the National Security Act as student activists in the ’80s.

Hwang’s ideological background and career in the prosecution and government shows why he is regarded by many on the right as the LKP’s only hope to take over Korean politics after suffering a series of debilitating electoral defeats in the aftermath of Park’s ouster.

After passing the government judicial examinations in 1981, Hwang made a name for himself under the Chun Doo Hwan regime as a public safety prosecutor who fiercely cracked down on violators of the National Security Act. This controversial law bans any unauthorized contact with North Korea, but was often arbitrarily exercised to suppress dissent in the South.

Many on the left believed it was this reputation that led former President Park Geun-hye to tap Hwang as her minister of justice in 2013.

As justice minister, Hwang personally led the charge against a far left party for anti-state conspiracy in 2014. This eventually led to the party’s disbandment and instantly elevated Hwang as a darling of the anti-communist right.

Park eventually made Hwang her prime minister the following year.

He then served as acting president for three months in early 2017 while the Constitutional Court deliberated on Park’s removal following a dramatic corruption and power abuse scandal.

In his bid for LKP leadership, Hwang is expected to face a competitive race with Oh Se-hoon, a former mayor of Seoul who joined the party last November with similar ambitions.

While Hwang denied the existence of factions in the LKP, it is no secret he commands significant support from pro-Park loyalists in the party.

By some estimates, this faction constitutes up to two-thirds of all LKP seats in the legislature and holds powerful sway over the party’s overall stance.

Unlike Oh, who left the LKP’s predecessor - the Saenuri Party - after Park was impeached in December 2016, Hwang is widely regarded by rank and file LKP supporters as the guardian of her legacy and legitimate successor to vindicate her, making him a favorite to win the February race.

But that same association with Park is bound to elicit a powerful opposition to Hwang among moderates and liberals if he goes on to run for president, as many fear his assumption of power would mirror Park’s.