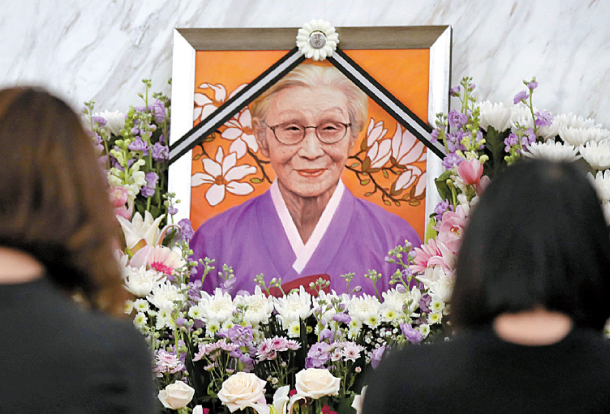 A memorial altar for Kim Bok-dong, a victim of Japan’s wartime sexual slavery, at Yonsei Severance Hospital in western Seoul on Tuesday. [YONHAP]

The Korean government on Tuesday mourned the death of a victim of Japan’s wartime sexual slavery who was well known for working to raise public awareness of the issue.

Kim Bok-dong died at 10:41 p.m. on Monday at Yonsei Severance Hospital in western Seoul, according to the Korean Council for Justice and Remembrance (KCJR). She was 93. She had been battling cancer.

“It’s regrettable that Kim Bok-dong, who had suffered agony as a victim of Japanese troops’ comfort women system, has passed away,” Foreign Ministry spokesman Noh Kyu-duk said at a press briefing.

Foreign Minister Kang Kyung-wha plans to visit a mortuary in person to express her condolences later in the day or on Wednesday, he added.

Hundreds of people have already been seen rushing to the funeral hall set up at the Seoul hospital to pay their final respects to Kim.

Among them was President Moon Jae-in, who wrote in the visitors’ log, “Fly away like a butterfly.”

The president did not make any comments, but his visit itself was widely seen as a call for what many Koreans believe to be a long overdue apology from Japan for its past wrongdoings. Kim’s death brings the number of survivors of Japan’s sexual slavery during World War II down to 23. It came only hours after another elderly victim passed away early on Monday.

“Her last words were: ‘Please fight this out until the comfort women issue is resolved,’” Yoon Mi-hyang, the head of the KCJR, told reporters.

Kim is considered a symbolic figure in Korea and worldwide for her monumental work in disseminating the truth about Japan’s sexual slavery and her active role in promoting women’s rights issues, especially for those who have experienced wartime sexual violence in recent decades.

She spent most of her later years advocating for the anti-war movement and campaigning for women’s rights issues, especially for those who experienced wartime sexual violence in recent decades. Kim was also a generous donor. She made donations worth tens of millions of won each to Japan-based schools set up for ethnic Koreans, as well as to victims of civil war and armed conflicts. A funeral service hosted by the council will take place near the Japanese Embassy at 10:30 a.m. Friday. A memorial altar has been set up in the funeral hall of the Yonsei hospital.

A native of Yangsan, South Gyeongsang, in the country’s south and born the fourth of six daughters, she was coerced into working at a military brothel in 1940, when she was 14.