Beijing’s pollution crackdown may be easing

Beijing’s pollution crackdown may be easing 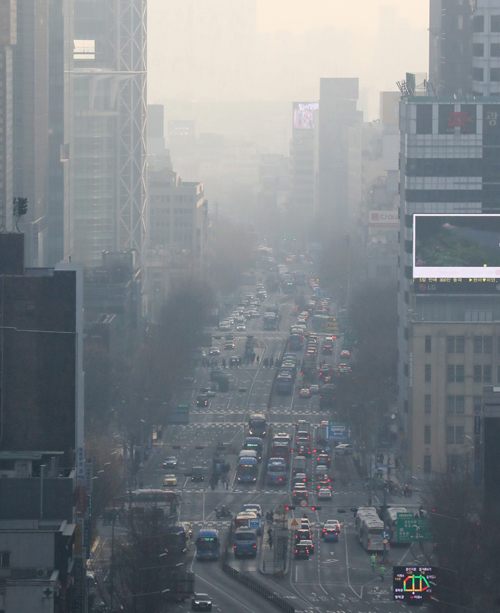 Has the Chinese government eased its crackdown on pollution as a trade war with the United States takes a toll on the local economy?

Drawing from recent data on worsening air pollution in Beijing this winter and an announcement by the Chinese government that lowers the fine dust reduction target, some experts are posing that question.

To find out, the JoongAng Ilbo spoke with locals and experts in Beijing, Qingdao and Seoul.

The tit-for-tat tariff quarrel between China and the United States dates back to 2017.

That meant the PM2.5 concentration in Beijing should have dropped to around 60 micrograms or less as an average for all days of the year.

The Chinese government did reach this goal at the end of 2017 by shutting down nearly 2,000 factories and banning over 2 million highly polluting vehicles from roads in Beijing, according to a Reuters report in January 2018. The annual average of PM2.5 particles in 2017 was 58 micrograms.

PM2.5 particles are less than 2.5 micrometers in diameter, about 30 times smaller than the width of a human hair.

The World Health Organization (WHO) describes them as carcinogenic since PM2.5 particles can travel through the respiratory tract and reach the bloodstream, causing lung cancer and other lung conditions, as well as heart conditions and stroke.

The WHO recommends daily exposure of no more than 25 micrograms of PM2.5 particles.

The reduction was visible in the monthly count of PM2.5 particles as well.

According to the Chinese Ministry of Ecology and Environment, the monthly average of PM2.5 particles in Beijing decreased from 57 micrograms in October 2017 to 46 micrograms in November 2017.

The Chinese government continued to set goals to reduce the level of PM2.5 particles in 2018.

But two months later, it reduced the target rate to 3 percent.

Some experts asked whether the fine-dust policy was being softened due to a slowdown in the local economy following a year-long trade war with the United States.

That was the suggestion in comments by the environment minister in October 2018.

“It is becoming more complicated to carry out some environmental policies as the projection on where the national economy is headed is increasingly unclear amid slow economic restructuring,” said Li Ganjie, China’s minister of ecology and environment at a conference in Beijing last October.

“In the near future, we will cease the policy of completely shutting down factories and officials will be instructed to curb emissions in other ways,” Li said. “We cannot continue with the policy in the same manner, which would hurt the legal rights of companies or violate the rights of citizens.”

Although it is unclear whether the alleged loosening of anti-emission regulations had a direct impact on the level of PM2.5 particles in Beijing, the monthly average in Beijing shot up from 44 micrograms last October to 73 micrograms in November.

As more media reports pointed to the possibility of China’s emissions policies being softened amid its economic slowdown, the Ministry of Ecology and Environment tried to set things right.

Not a slowdown but balancing out

Some experts in Korea agreed the lower target is actually both a more reasonable and reachable one.

“The Chinese government rammed through the regulations in 2017 and some experts criticized the regulations as one-sided and purely focused on the environment,” said an official of the Korean Environment Ministry. “That’s why the government decided to bring down the target reduction rate to 3 percent last year. It doesn’t mean that they are going to allow more emissions - but it is more of a balanced rate.”

Xie Hongxing, director of the Clean Air Alliance of China, said policies to curb emissions in China will “become more scientific and systematic,” in a recent interview with the JoongAng Ilbo.

“We will have to wait and see how high the fine-dust level will be,” he said. “But the policies will become more scientific and systematic,” as well as more flexible.

“Last year, there was quite a bit of public opposition against the hard-line 50-percent reduction on the number of steel factories,” said Huang Wei, a public awareness coordinator at Greenpeace East Asia. “This year, the government changed its policies to be more flexible. The companies that are meeting the emission standards are to be allowed to operate.”

The Chinese government’s goal for fine-dust reduction is to reach an annual average of 35 micrograms or less throughout the country by 2030.

The annual average in Beijing in 2018 was 52 micrograms, according to the Chinese Ministry of Ecology and Environment.

“The goal may be reachable, as more industries in China are being upgraded along with the fourth industrial revolution,” a Chinese Academy of Sciences employee told the JoongAng Ilbo. “And the general projection is that the demand for energy and resources may decrease over time in China.”

“I think the difficulty in tackling emissions for any country is that it becomes increasingly harder,” said Dong Jong-in, a professor of environmental science at the University of Seoul. “Once you have improved the air quality somewhat, it becomes even harder to achieve additional improvement because you need more advanced technologies that are more expensive.”