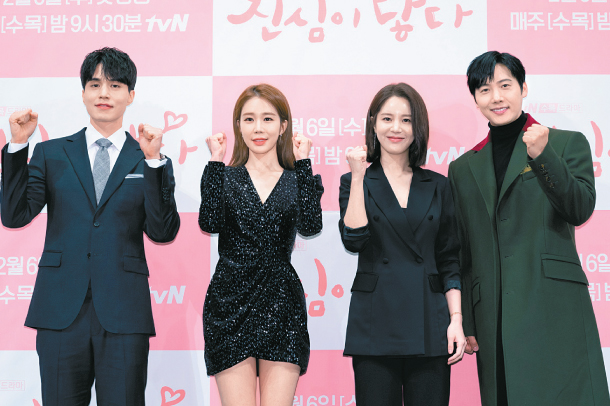 The beloved on-screen couple Lee Dong-wook and Yoo In-na from tvN’s hit drama “Guardian: The Lonely and Great God” (2016-17) have returned to the network in a new series titled “Touch Your Heart.”

Directed by Park Joon-hwa, whose previous titles include the “Let’s Eat” series and “What’s Wrong With Secretary Kim” (2018), his latest offering, which will air its second episode tonight at 9:30 p.m., centers on the romance between lawyer Jeong-rok (Lee), a perfectionist with a brusque personality, and his newly-hired secretary Yun-seo (Yoo), a beautiful yet low-performing actor whose career began falling apart following a scandal. In order to research a role she was offered in a new TV series after a hiatus, she begins working for a law firm to gain hands-on experience.

“At the core of this drama is the journey of Yun-seo discovering happiness in life through spending time with people from the law firm,” Park said during a press event held Tuesday at the Imperial Palace Hotel in Gangnam District, southern Seoul.

When asked about concerns over reuniting Lee and Yoo, whose chemistry may remind viewers of what they saw in “Guardian,” Park said he was adamant about highlighting new aspects of the duo.

“The most important part of casting is whether [actors] fit their characters. I thought the two actors matched very well with the characters from ‘Touch Your Heart,’ and I, in fact, saw many new aspects of these two while working on the series,” he explained.

For Lee, playing a cold man with a warm heart was quite familiar, as it resembles his own personality. “[Jeong-rok] is similar to myself. I’m not always a friendly person. I think some aspects [of Jeong-rok] are actually [just] me,” Lee said.

In the two years since “Guardian,” Yoo explained she did not take on any TV roles because she did not feel like she fit into any of the roles she had been offered. But once she read the script for “Touch Your Heart,” all of her concerns about what her next role would be melted away, and she decided to jump into the role.