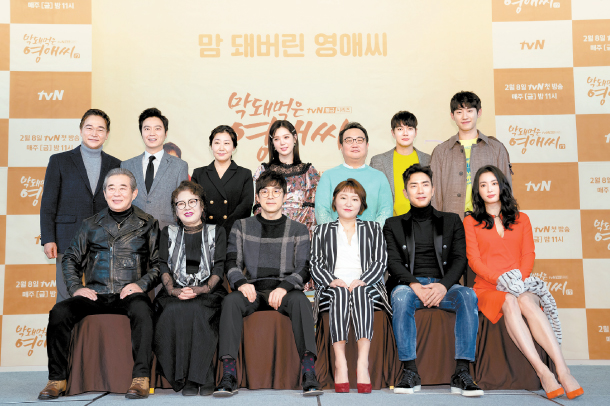 Cable channel tvN’s comedy series, “Rude Miss Young-ae” has long been loved for its realistic depiction a woman in her 30s living in Korea. Like many working women living in Korea, Young-ae, played by actor and comedian Kim Hyun-sook, goes to work every day, has romantic issues to deal with and is burdened by her workload in the office.

But her life does not get any easier after she gets married and has a child - she never realized that parenting would be this tough. “Rude Miss Young-ae” is now back for season 17, which will premiere on Feb. 8, and will focus on Young-ae’s life as a working mom.

“Our original purpose of the series was to depict the love life of a single woman,” he said. “But that took an unexpected turn last season when Young-ae got married.”

One of the reasons for the new direction of the series, he believes, is that many of the actors on the show are married and have kids in real life, including the director himself and the two lead actors, Kim and Lee Seung-jun, who plays Young-ae’s husband. Although the actors were able to relate to their roles, filming the series was not easy.

“My son is five years old,” said Kim. “I can sympathize with a lot of scenes, for instance, when I had to hold onto the baby, change her diapers and push her in the stroller - everything I did was based on real experience. But it’s hard to care for a baby, and it’s also hard to film a series. Playing my role this season was like filming and taking care of a baby at the same time. Everything was centered around the baby.”

Lee, however, believes that he is good at dealing with babies.

“Although taking care of an infant is not romantic at all, the baby was pretty gentle, so filming for me wasn’t that hard,” he said. “I think babies like me. Once, I was resting in my car when the director called me. When I arrived on set, everybody turned around to look at me because the baby was crying before I got there. But, she stopped when I held onto her.”

Kim added, “Once, I had to film with the baby all day long. When I was with the baby, she kept on crying, but strangely, when Lee came to film that night, the baby stopped crying and smiled.”

Kim says that a lot of working moms will be able to relate with Young-ae in the series.

“Both working moms and working dads will relate and learn a lot from the series,” she said.