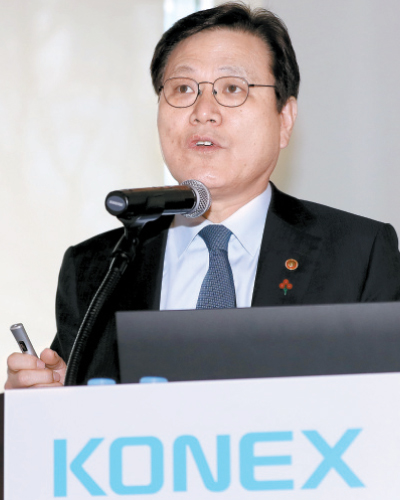 Rules for the Korea New Exchange (Konex) are being eased in an effort to attract more companies and more investors to the market, the country’s tertiary exchange.

On Wednesday, the Financial Services Commission (FSC) said it will allow companies on Konex to secure investments through crowdfunding for their first three years on the market. It also said it would reduce the minimum deposits individuals need to qualify for trading.

Konex was formed in 2013 to connect small- and medium-sized companies and start-ups with capital.

“Although the Konex market by volume has been growing, there have been comments that innovative companies were facing problems in securing the necessary funding due to the lack of transactions and that there were issues with payback periods,” FSC Chairman Choi Jong-ku said. “We have introduced the measures to recover the identity of Konex as a stepping stone for venture companies to grow.”

Other reforms are also being made. External audit requirements have been eased, while the process of upgrading to a higher market is being sped up.

While the market is being supported with rule changes, investor protection is being strengthened. The financial authority is increasing the number of information categories requiring public disclosure to 35 from 29.

Securities firms that trade shares in insolvent companies will be suspended for one year, up from the current six months.

Since the Konex was launched, 44 Konex companies have moved to the larger Kosdaq.

The market was created to serve as a platform to help businesses that are too small to be listed on the secondary Kosdaq market and heavily dependent on bank loans for funding.

In recent years, Konex hasn’t been able to generate much interest. The number of companies newly listed has been falling each year since peaking at 50 in 2016. In 2017, 29 companies were listed, and last year there were only 21.

While companies hope to quickly upgrade to the Kosdaq, it has taken two years to make that leap on average. For investors, the market hasn’t been appealing due to its low volume.