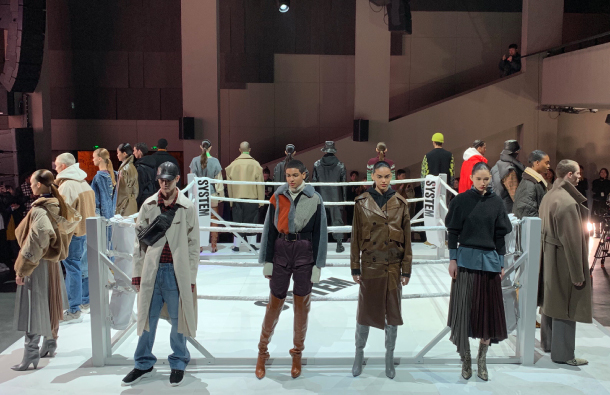 Handsome, a Korean fashion brand owned by Hyundai Department Store, brought two of its labels to Paris Fashion Week in an effort to expand on the global stage.

System for Women and System Homme, the two Handsome brands, showcased their fall and winter collections in a rented showroom for eight days starting from Jan. 17.

The Handsome event included a presentation of the collections followed by showroom events, where item were modeled for clients.

The brands are presenting their new collection one season early to major buyers in the fashion industry.

In addition to 180 buyers, the event was attended by the Wall Street Journal, Vogue and GQ as well as by fashion influencers.

It was the first time Handsome has taken its brands to a foreign showroom since being founded in 1987.

System for Women debuted in 1990 and System Homme in 2008. The company has also introduced other names, including Time, Mine and SJSJ.

Handsome was acquired by Hyundai Department Store Group in 2012.

At the Paris event, which featured 200 items for men and women, around 40 department stores from 14 countries participated. Samples were purchased ahead of possible quantity orders.

It was a buyers’ who’s who. The list included representatives from Bloomingdales, France’s Le Bon Marche, Hong Kong’s Lane Crawford, Japan’s Isetan and Shanghai’s 10 Corso Como. Inquiries also came in from parties in Switzerland and Israel.

“We predicted the number of businesses that would visit our showroom would be 40 at maximum. But since System Homme was introduced via major media outlets and social media after the presentation on Jan. 18, a great number of fashion businesspeople visited,” said a source from Handsome.

The company said that visitors appreciated the designs as being unique and set apart from other major Asian brands.

“In the case of businesses that received the samples, they will decide on quantity purchases in February, and in June, the main products of System [for Women] and System Homme will be sold at department stores and in multibrand shops of each country,” said a source from Handsome.

Handsome is planning to use the Paris showroom event as a stepping stone for its international expansion efforts.

In line with the strategy, it will complete its product development earlier and present new design concepts to the market one season ahead.

It is rare for a ready-made brand to utilize this sort of advanced development.

“Our brand is still new in the global fashion market, but we will elevate awareness to the point where we could open an exclusive fashion show at a foreign fashion week,” said Kim Hyung-jong, the CEO of Handsome.