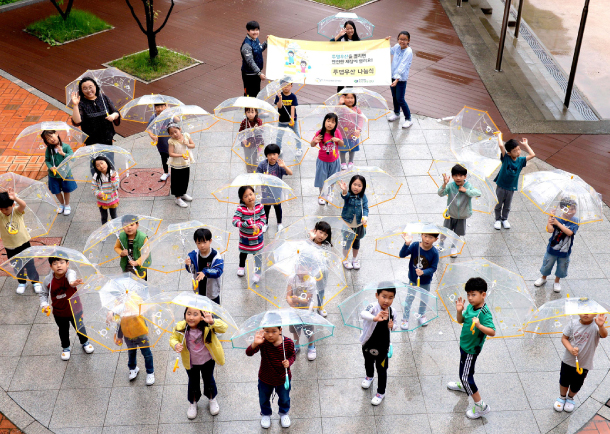 Children pose for a photo with see-through umbrella specially designed by Hyundai Mobis. Giving out the umbrellas and offering traffic safety training to children is a corporate social responsibility program run by the auto parts maker since 2010. [HYUNDAI MOBIS]

The Hyundai-affiliated auto parts maker has given out 100,000 special see-through umbrellas to children every year since 2010 along with traffic safety training at elementary schools and other education institutions.

Umbrellas designed by Mobis were delivered to 900,000 children from 1,400 schools and institutions as of 2018, according to company figures.

Mobis cited internal research with a sample of 64,000 children that received umbrellas and traffic education supported by the company to show its program cut the number of traffic accidents by an average of 27 percent over the last two years.

The Hyundai affiliate also added that children who took traffic safety training showed better behavior while crossing roads, such as checking whether a car is coming and standing far away from the road while waiting for traffic lights.

Mobis said the umbrellas are also designed to prevent traffic accidents when it is raining. The tip of the umbrella is covered in reflective tape so that cars can more easily recognize kids that are crossing the road. The umbrella is also see-through, so that children can see what is going on while walking. The umbrella comes with a whistle in case of an emergency.

“By the end of this year, we will be delivering a million umbrellas to children,” said Lee Kwang-hyung, general manager of the CSR team at Mobis. “As we have seen the effects of our traffic safety campaigns, we will keep developing content to better train our children about road safety.”