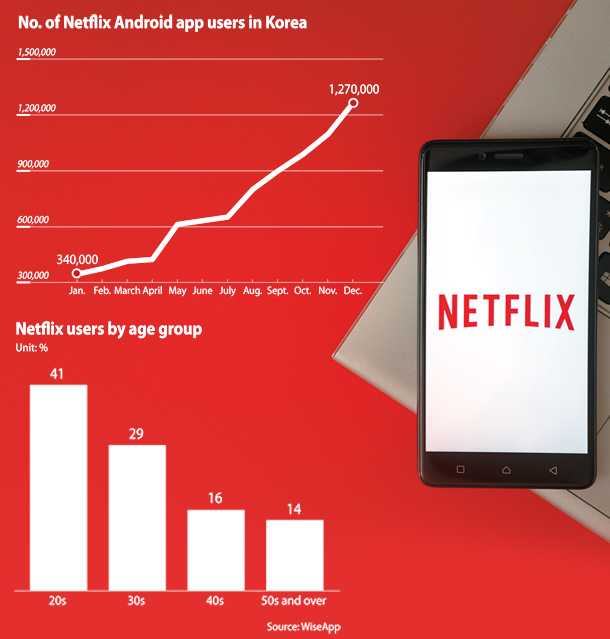 Netflix viewership is growing faster than ever in Korea.

According to mobile app tracker WiseApp on Tuesday, 1.27 million Android users in Korea used the Netflix app in December last year. That’s nearly four times, or 274 percent, more than the beginning of the year, when just 340,000 Android users had used the app in January 2018. Nearly half, or 41 percent, of Netflix users were in their 20s.

WiseApp estimated that there are around 900,000 paying Netflix users across all devices in Korea who spend a monthly 11.7 billion won ($10.5 million) combined on the platform.

Netflix users are allowed to share their account with family members and friends, so the number of paying customers is always lower than the number of users. Netflix also offers a one-month free trial, giving first-time users unlimited access to the platform for a limited time.

Onlookers have suggested a variety of possible explanations for Netflix’s growing success in Korea and the rest of the world.

Park Yong-hu, an IT expert who has previously worked for Kakao and Baedal Minjok operator Woowa Brothers, believes the absence of advertisements allows Netflix original content creators greater freedom to come up with fresh and innovative material.

“Platforms that host advertisements often run into the problem of whether to prioritize users or advertisers first,” said Park. “For companies like Netflix, however, where the client and user are the same, they have the advantage of being able to clarify their vision.”

Netflix confirmed that it doesn’t try to limit creators.

“Netflix never requests creators change their stories,” added a spokesperson from Netflix in Korea. “Creators are guaranteed that they will create the content they want and Netflix just helps to realize their dream.”

Convenience is another feature winning over users.

From smart TVs to tablets, there are over 1,500 different types of smart devices that Netflix currently supports. The 14,500 won premium subscription option in Korea allows up to four people to use the platform at the same time, even in 4K ultra-high definition.

With Netflix’s Smart Downloads, users don’t even have to bother downloading shows themselves. The smart feature automatically deletes an episode a user has finished watching and downloads the next one.

Netflix’s recommendation system also attempts to offer users enough content that fits their preference so that they keep using the service.

“Netflix does not gather user data by categorizing them into groups like ‘a male bachelor in his thirties living in Seoul,’ but we instead [suggest shows] by looking at the types of content that they have watched and the reviews they have left,” said a Netflix spokesperson.

Netflix’s vast potential was most recently demonstrated by the tremendous success of its original film “Bird Box” starring Sandra Bullock. In a move untypical for the company, Netflix took to Twitter to reveal that 45 million users worldwide had streamed the post-apocalyptic hit within its first week of release last month.

This year, the streaming platform is ambitiously trying to make its debut in the Korean drama scene. It has already confirmed the launch of several original Korean drama series with genres ranging from teen-romance to zombie-thriller, and started strong with the release of “Kingdom” last week, starring famous actors including Bae Doo-na of “Cloud Atlas.”

Some believe it will be just a matter of time before Netflix becomes a force to be reckoned with in the domestic drama industry.

“The threat Netflix is posing to Hollywood means that even production and distribution of video content cannot escape the currents of the fourth industrial revolution,” said Park.