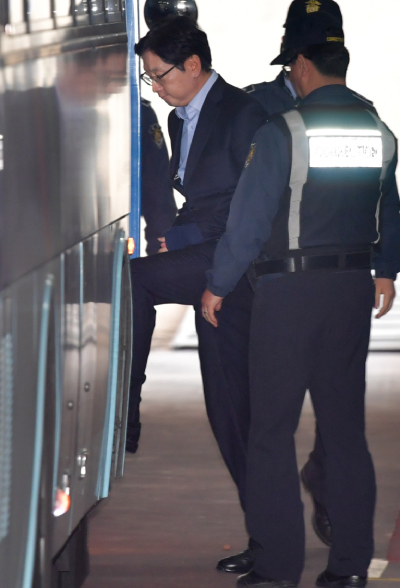 South Gyeongsang Gov. Kim Kyoung-soo boards a bus headed to a detention center on Wednesday after the guilty ruling. [NEWS1]

South Gyeongsang Gov. Kim Kyoung-soo was placed under immediate detention on Wednesday after a Seoul court sentenced him to two years and 10 months in prison for his role in a major online opinion-rigging scandal in collusion with a political blogger during the 2017 presidential election.

The Seoul Central District Court ruled that Kim Kyoung-soo was a joint principal offender in the crime along with blogger Kim Dong-won, better known by his internet alias Druking, who was given a three and a half year prison sentence by the same court hours earlier.

The two were found guilty of jointly orchestrating a massive opinion-rigging campaign using a computer program to post and “like” thousands of comments on social media that supported Moon Jae-in’s election bid.

“This crime severely debilitated the healthy formation of public opinion through exchange and debate in an online space,” said Seong Chang-ho, the judge presiding over the case at Kim Kyoung-soo’s sentencing Wednesday afternoon. “The criminality of this case is especially severe since public opinion was mechanically distorted away from the will of the electorate.”

Kim Kyoung-soo’s conviction and jailing marks a mighty fall from grace for a close ally of the administration and a presidential hopeful for the ruling Democratic Party (DP).

He will retain his position as governor of South Gyeongsang for now, even in detention, but will be removed from office if his case goes to the Supreme Court and he loses. Election laws dictate that any elected official who receives a prison sentence or any fine above 1 million won ($895) are removed from their posts.

The governor’s party, as well as the Moon Blue House, are sure to be hammered by the opposition as a result of this verdict, which came as a surprise to many who believed the special counsel investigation into the case found weak evidence against Kim Kyoung-soo.

The court acknowledged that the program used in the online campaign, called King Crab, had been developed with Gov. Kim’s tacit approval after he had been shown a preliminary demonstration of its prototype in November 2016.

Thus, it accepted the special counsel’s conclusion that Kim Kyoung-soo, then a DP lawmaker, was the driving force behind the opinion rigging.

When indicting both figures in July, the special counsel said the operation had obstructed the businesses - a criminal charge - of multiple portal websites by fiddling with around 1.18 million online comments posted on a total of 76,083 news articles.

The governor’s complicity in the scandal hinged on whether he was aware that Druking’s group was conducting a systematic opinion-rigging campaign, an allegation that he categorically denied throughout the 60-day special counsel probe that began last June as a result of intense pressure from opposition parties.

Kim Kyoung-soo was completely aware that the opinion rigging was proceeding during the election, and had regularly received confirmation reports on the effort from Kim Dong-won through a messaging application, the court said.

The court further accepted the prosecution’s charge that Kim Kyoung-soo had promised Kim Dong-won a diplomatic post for a friend - a consular generalship in Sendai, Japan - in exchange for his continued service in the run-up to local elections last June, in which Kim Kyoung-soo won the gubernatorial race in South Gyeongsang.

Such an exchange constitutes a violation of campaign finance laws, for which Kim Kyoung-soo was given a 10-month prison sentence in addition to the two-year sentence for the obstruction of business charge.

No one was more surprised with Wednesday’s verdict than Kim Kyoung-soo himself, who pledged he would appeal the case and “begin another long fight towards the truth.”

“[The court] ignored the truth revealed during the trial and only accepted the one-sided argument of the special counsel,” read the governor’s hastily drafted official statement after the hearing. “I cannot understand nor accept this verdict of guilt based on flimsy arguments by the special counsel and false testimony from Druking and his associates.”

Gov. Kim’s statement also questioned the neutrality of presiding Judge Seong, whom he claimed has a special relationship with former Chief Justice Yang Sung-tae, who was recently jailed for meddling with trials during the previous administration. “My concern [that Seong’s ties to Yang would affect the trial] has turned into a reality,” Kim wrote.

Pandemonium ensued inside and out of the courtroom following the sentencing, with Kim’s supporters openly weeping and crying foul over the verdict as guards tried to restrain them. Conservative groups standing nearby jeered and cheered the results.

But such colliding emotions may only be the beginning of the political earthquake sure to follow.

As they had done when calling for the special counsel investigation into the scandal, the opposition is likely to use the court’s verdict to question the legitimacy of President Moon himself.