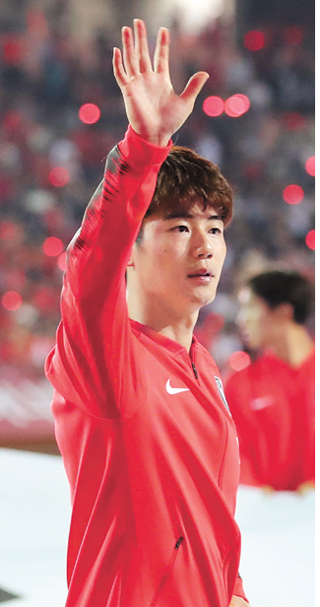 Ki made it official on Wednesday that he will no longer play for the Taeguk Warriors. The 30-year-old anchorman ended his international career as the eighth-most capped Korean player, with 110 appearances. He also scored 10 goals for Korea.

Ki, who now plays with Newcastle United in the English Premier League, has experienced ups and downs with the national team since his international debut against Jordan in a friendly match on Sept. 5, 2008.

Known for his vision and passing skills, Ki began his international career with high expectations and lived up to his reputation.

His first major tournament was the 2010 FIFA World Cup in South Africa, where he helped Korea reach the round of 16 for the first time on foreign soil. He played in all four matches and collected two assists by setting up both of Lee Jung-soo’s goals - one each against Greece and Nigeria

Ki had his first Asian Football Confederation (AFC) Asian Cup in 2011. He stirred controversy in the semifinals against Japan, when he celebrated a goal with a perceived racist gesture.

In 2012, Ki represented Korea at the London Olympic Games and won a bronze medal after beating Japan. With that achievement, he earned an exemption from mandatory military service and was able to resume his overseas club career without interruption.

During the 2014 World Cup qualification round, Ki once again found himself the center of controversy, after mocking Choi Kang-hee, the national team’s head coach at the time, on social media. Despite receiving a warning from the KFA, Ki remained a core member for the national team.

Ki played in his second World Cup in Brazil, but didn’t experience the success he’d had four years earlier. He played all three matches for Korea, but the team was eliminated in the group stage with one draw and two losses.

Ki was named captain of the national team ahead of the 2015 Asian Cup by Uli Stielike, who was head coach at the time. Leading his teammates on the pitch, he played all six matches at the continental tournament, as Korea came up just short of the title, falling to Australia 2-1 in the final.

The former Celtic and Swansea City midfielder made his 100th international appearance on June 1, 2018 against Bosnia and Herzegovina at home for a World Cup tune-up match. But he couldn’t smile as Korea lost the match 3-1.

Ki’s third and last World Cup was in Russia last year. Again wearing the captain’s armband, Ki started in Korea’s 1-0 loss to Sweden and 2-1 defeat to Mexico in the group stage. Korea stunned then world No. 1 Germany 2-0 in their final group stage match, but Ki was absent due to an injury.

After the 2018 World Cup, Ki hinted at national team retirement, but didn’t specify when he would call it quits. And following persuasion by new head coach Paulo Bento, Ki decided to compete in the 2019 Asian Cup as his final international event.

His last action with the national team wasn’t pretty.

Ki’s only appearance at the 2019 Asian Cup was Korea’s opening match against the Philippines, which turned out to be his final national team appearance. Korea won 1-0, but Ki didn’t play full time as he sustained a hamstring injury during the match.

Due to the injury, Ki was later allowed to return to his EPL club in the middle of the tournament. Without Ki, Korea was eliminated in the quarterfinals after losing to Qatar.

Ki experienced only 30 defeats with Korea in his 110 international appearances. Although there were controversial and disappointing moments in his career, Ki, a three-time KFA Player of the Year, will be remembered as one of the most decorated midfielders in Korean football history.