Korea’s Trade Ministry is planning to push exports even harder this year amid early indications of slowing trade numbers and uncertainty in the global economy. 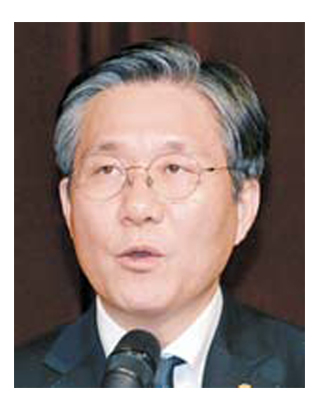 At a press dinner Wednesday, Minister of Trade, Industry and Energy Sung Yun-mo said the ministry is going all out to improve export figures, looking to match last year’s record-high numbers.

“We will […] reach $600 billion in exports this year. All our branches will do their best with the private sector.”

Korea’s exports surpassed $600 billion in 2018, a record high on strong sales of semiconductors and petroleum goods.

The minister’s comments came after Finance Minister Hong Nam-ki expressed concerns about the country’s weakening exports this year earlier that day. The government estimates that in the first 20 days of the month, exports fell 14.6 percent compared to a year earlier.

The trade minister explained that export efforts will be conducted through cooperation with other ministries and that a government plan will be announced February.

“It won’t simply be making preparations for measures on exports by industry through the Trade Ministry, but using a system that implements necessary measures right away,” said the trade minister. “The February plan will likely encompass all export measures by ministry.”

Sung also discussed the ministry’s position on regulations, saying it will value both the interests of businesses and the public.

“There are values that must be protected, such as safety in terms of regulations, but also those that need to be sidestepped for industrial and economic values,” explained Sung. “The question is how to provide harmony between the two values.”

As for foreign firms in Korea, the minister acknowledged their dissatisfaction with changing regulations.

“Foreign investment companies seem to be disappointed as tax benefits were abolished,” said Sung. “This was actually unique to Korea from the global standard […] we are trying to make up for this by increasing financial support.”

The minister refused to comment on a petition to the Blue House to restart construction on nuclear power plants Shin Hanul 3 and 4 that racked up over 380,000 signatures. The government halted construction of the plants as part of its efforts to decrease reliance on nuclear energy.

“[This] is for the Blue House to decide,” said Sung. “I think it could be thinking about ways to respond [to the petition].”