Video is posted in response to carpool petition

Video is posted in response to carpool petition 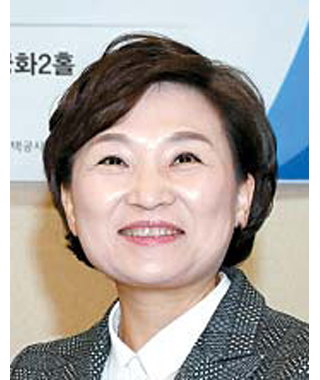 Land, Infrastructure and Transport Minister Kim Hyun-mee personally responded on Thursday to a petition that opposes the introduction of Kakao’s carpool app, saying that the government is looking into the possibility of using the IT platform for existing taxi services.

“We need to merge new technology with traditional industries in creating new services,” Kim said in a video that was uploaded to the government’s petition website. “It would be meaningful in raising the operation rate of taxis while developing various services through integrating platform technologies with taxis.”

On Oct. 16 last year, a petition opposing the Kakao’s launch of a carpool app was started. It gained 216,448 signatures in just one month.

The government has to personally answer a petition when it gains the approval of over 200,000 people within 30 days.

An anonymous petitioner called the app as “illegal.”

“I petition [the government] not to take away the jobs of many cab drivers who spend several years on the road to make a living,” the petition claimed. It added that instead of allowing paid carpools, the government should allow taxis to take multiple passengers on different journeys, as is done with Uber pool. The practice has been banned since 1982.

The petition argues that allowing the carpool app to be launched would be same as allowing people to drive cargo trucks without the right license or to run a pharmacy or a real estate agency without being properly certified.

“Taxis have been an important transportation means in our country, but there are a lot of taxis that failed to operate properly due to the lack of drivers, and this is because the income of the drivers is low compared to the long hours that they work,” Minister Kim said. “As a result, many people have experienced inconvenience.”

She noted that positive steps have already been taken with a formal body for reaching compromise this month.

“Although there have been various difficulties and conflicts regarding carpools, on Jan. 22 we have finally taken the first step with the social compromise body and have been working on developing the best agreement,” Kim said. “During the Jan. 25 meeting, we agreed to discuss permitting a taxi service that allows the platform to be used on taxis.”

She said while there are a lot of hurdles due to the sensitivity of the issue, the government, through the compromise body, will come up with a solution in which Kakao, the taxi industry and customers would benefit.

“We have to find a way where everyone in the industry and most of the public is satisfied,” Kim said.