Life after the cryptocurrency craze

Life after the cryptocurrency craze 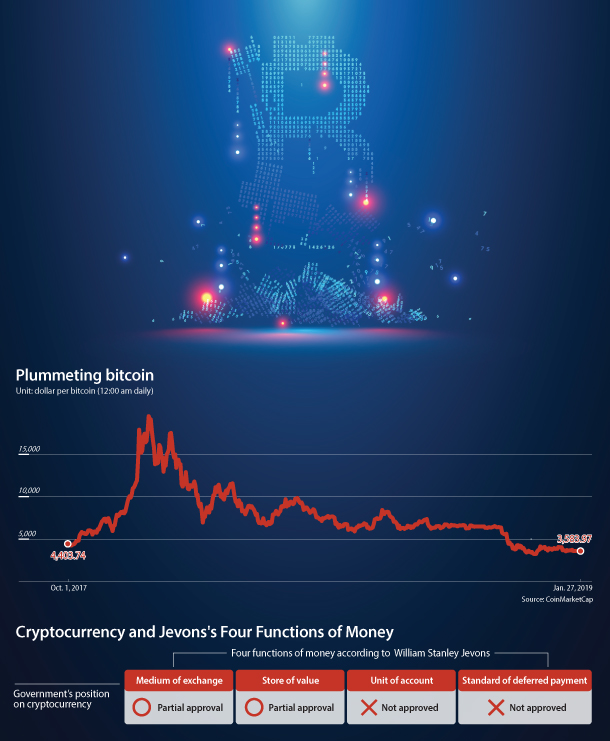 Just a year ago, reports of government plans to shut down cryptocurrency exchanges enraged investors in a market that, at the time, saw incredible returns. Investors, largely in their 20s and 30s, stormed the Blue House’s petition board to complain.

Exchanges ultimately weren’t shut down, but the outrage that followed the proposal showed the powerful grip that the “crypto craze” had over Korea last year.

Today, the mood surrounding cryptocurrency is drastically different. The price of one bitcoin, which was at over 25 million won ($22,500) in January last year, has plummeted to 3.8 million won as of Jan. 28 this year.

The JoongAng Ilbo met with two cryptocurrency investors to talk about their experience over the past year. The two were swept up in the cryptocurrency craze and even put themselves in debt to buy more tokens.

Both investors lost huge amounts of money gambling on cryptocurrency, and for that reason they have both requested anonymity.

“A” is an office worker in his 20s who works at a large company. “B” is in his 30s and works at a financial company.

Q. How did you start investing in cryptocurrency?

B: I started investing in August 2017 as I saw colleagues making investments. I remember that our company sent a message warning employees not to invest in bitcoin. Employees secretly shared investment information through Telegram. If the auditing department ever found out, rumors could spread throughout the entire company.

How much did you invest?

A: I started out with 20 million won. I made the decision to increase my investment after I saw tokens recommended by the investment forum rising. After a month, in May 2017, I poured everything I had into cryptocurrency and even put myself in debt to invest a total of 100 million won.

B: I invested 50 million won. I didn’t have much money so I also put myself in debt.

How did you feel when prices rose?

A: It felt like I was in another world. At the time, my account would be at 100 million won before work and rise to 130 million won when I got off. I was sure that I would become rich quick. Not just me, but everyone else in the investment forum was on cloud nine, comparing each other’s rate of return.

B: I was nearly insane. When I met customers at work, I would place my phone on the corner of my desk to check prices. At the time, my account would rise by 1 to 2 million won over lunchtime. There was a lot of talk between office workers that their monthly pay [4 million won] doesn’t really seem to look like money anymore.

How much money did you end up with?

A: My account grew to 500 million won by December 2017. I should have cashed out then, but I couldn’t do it. In the end I was left with 70 million won. As I invested 100 million won, I have a rate of return of negative 30 percent. I actually fared relatively well.

B: One time, my account was at 100 million won. I have invested in stocks since my university years and had a principle of cashing out my original amount when I doubled my investment. I should have taken out my 50 million won back then but I couldn’t bring myself to do it. I broke my own investment rule for the first time. My investment is now at 13 million won, so I have lost 37 million won.

Do you regret investing in cryptocurrency?

A: I’m just regretful that I did not cash out at the right time. I don’t regret investing in cryptocurrency. It could be because my losses weren’t as large. I just tell myself that I had a nice dream.

B: I regret it. I am thinking about getting married next year, but I have nothing left. I will have to reach out to my parents. There is a lesson learned though. I set a rule to only invest in real tangible assets after my experience with cryptocurrency.