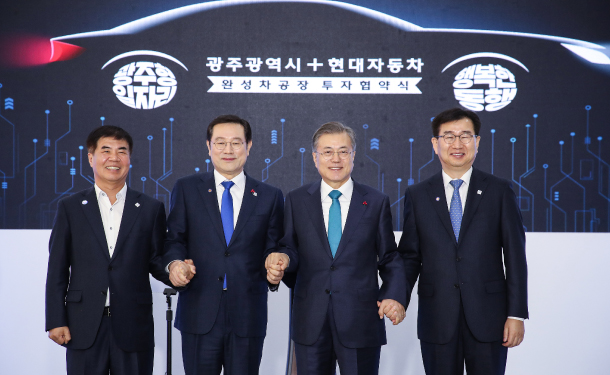 Hyundai Motor and the southwestern city of Gwangju reached a landmark deal on Thursday to build a joint venture plant capable of producing 100,000 cars per year - at much lower wages than at Hyundai’s other factories.

The agreement follows very rocky negotiations since the automaker tentatively agreed to join the Gwangju-led project last June. The so-called Gwangju employment plan is considered a breakthrough for Hyundai Motor to get relief from high labor costs and expand production. For Gwangju, it will create many jobs.

The two parties nearly clinched a deal in December before talks broke down over the issue of annual wage increases. Hyundai wanted no annual increases for the first five years of the plant’s operation. Gwangju’s city government wanted more lenient terms.

On Thursday, the two essentially agreed to suspend wage negotiations for roughly five years, or until the plant produces 350,000 cars. They left room for adjustments, though, in case of drastic changes in circumstances - such as if the plant proves to be very profitable.

The new car factory will have base capital of roughly 280 billion won ($251.7 million). The city government will be the largest shareholder with a 21 percent stake and an investment of 59 billion won.

Hyundai Motor will be the second largest shareholder with a 19 percent stake in the venture and an investment of 53 billion won. Gwangju plans to attract additional investors to the project to raise the remaining 168 billion won in capital.

Hyundai said it will not have any management rights in the joint venture but will be its major customer, deciding which models will be made there.

The new plant will be built on a 630,000-square-meter (155.6-acre) plot in the existing Bitgreen National Industrial Complex and start producing mini-SUVs from the second half of 2021. In the longer term, the plant is allowed to produce models by automakers other than Hyundai.

Hyundai said the SUVs made in Gwangju will be smaller than its compact Kona SUV, but larger than compact cars like Kia’s Morning or GM Korea’s Spark.

“We haven’t been able to enter the compact car market due to the low margins,” a spokesperson from Hyundai Motor said. “But we will develop a whole new car with a displacement similar to compact cars but with a frame similar to SUV designs [banking on the lower production cost in Gwangju.]” 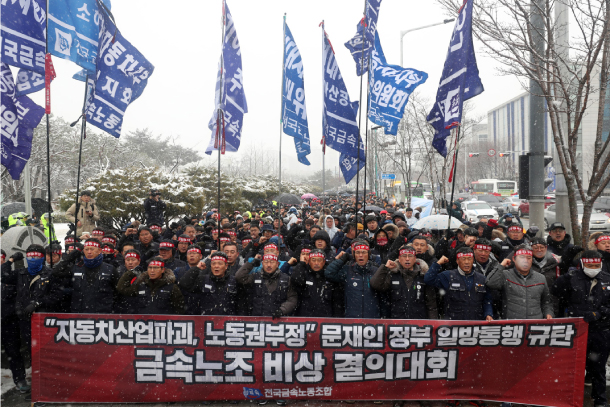 The plant is expected to hire roughly 1,000 workers as regular employees. Gwangju projects the plant will create more than 10,000 indirect jobs.

Workers at the Gwangju plant will receive on average 35 million won in annual pay on the assumption of a 44-hour week. The pay is less than half of what workers receive at other Hyundai factories.

The Gwangju government said it has prepared incentives for the workers such as tax cuts and housing support to bring their compensation closer to other Hyundai workers.

President Moon Jae-in, whose main campaign pledge was to create more jobs in the country, took part in the deal-signing ceremony Thursday in Gwangju. “We are building a new auto plant in Korea for the first time in 23 years,” Moon said. “I’m sure the Gwangju plant will become a model case of how companies and labor should cooperate.”

But Hyundai Motor’s labor union expressed bitter opposition to the plan Thursday, calling the plan an excessive and overlapping investment by the company that will ultimately disturb the domestic auto business, which already has excess capacity. The union said the deal was an obvious attempt by Hyundai Motor to lower its overall labor costs. The management of Hyundai’s union went on strike Thursday and said it will fight the deal along with the union of sister company Kia Motors.