‘We’re doomed!’ author says, unless we manage the future

‘We’re doomed!’ author says, unless we manage the future 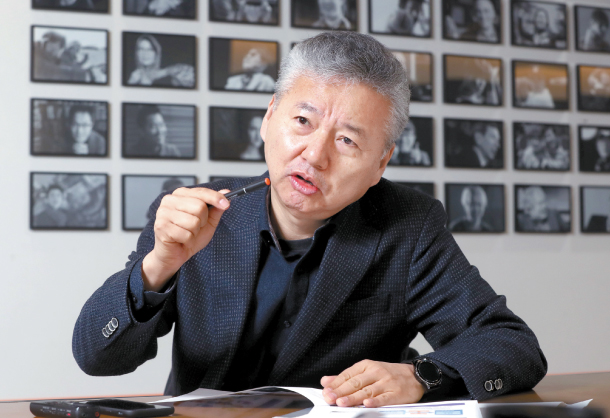 Hong Sung-guk received a lot of attention after he released a book called “Shrinking Society,” where he looks at the future of Korea. As a veteran researcher and former chief executive of Mirae Asset Daewoo, Hong takes great pride in the reports written by analysts from his company. He claims that the reports are close to perfect.

Because of his abundant knowledge about the economic world, he recently wrote the book “Shrinking Society.” In it, he diagnoses the problems of Korea and offers alternatives. He assesses the current situation as a transitional period in which an “expanding society” becomes a “shrinking society.” Since the 2008 global financial crisis, the size of the pie is not getting bigger for people to share anymore. Moreover, due to pollution and the declining population, growth is stagnating.

People are becoming more selfish than ever to survive on their own, and are even stealing pieces of others’ pies, he asserts. As a result of only focusing on growth in quantity, distrust and conflict is rampant in society. Therefore, in order to solve this problem, not only individuals, but also leaders of our society have to change altogether. Rather than expanding financial capital and intellectual capital, individuals need to cherish social capital, control their desires and be selfless. The leaders of our country should also look ahead at least 10 years farther than others. Furthermore, they should change educational institutions and elevate classes in diplomacy, he says.

JoongAng Ilbo interviewed Hong at the JoongAng Ilbo headquarters in central Seoul on Jan. 21. Below are edited excerpts of our conversation.

Q. For the readers who have not read the book, could you explain what a shrinking society is, and why this is significant?

A. We take for granted the fact that the pie is continuously getting bigger in an expanding society. However, on account of the global financial crisis triggered by the Lehman Brothers collapse in September 2008, the pie stopped growing. For the last 10 years, countries all over the world worked hard to expand the pie, but to no avail, and now we are in a zero-sum game where countries and members of communities steal from each other. If the pie starts to reduce in size, society has no choice but to transition into a shrinking society where a negative-sum game becomes permanent.

Why is the 2008 global financial crisis a turning point?

It was in 2008 that a complex phenomenon took place for the first time in human history. Population decreased due to low birth rates, aging and a drop in economic growth, and the quality of life deteriorated on account of environmental pollution. Humans also went through an identity crisis because of scientific development.

But isn’t it a jump of logic to connect that to a shrinking society?

It is the first time on record that the environment has constricted growth. Korea pays over 100 trillion won ($89.7 billion) every year solely for the cost of environmental pollution. It is the first time for a population to decrease without an outbreak of war. Machines started to replace the human brain. As a result, the most serious oversupply has taken place. As each country supports its economy by expanding the currency, debt has become the highest in history. People tend to think only about themselves, so trust toward society is also diminishing. As the polarization of the economy, culture and ideology gets worse, a zero-sum war to survive is breaking out. Eventually, the world will be stuck in a situation where growth and consumption are stalled and the interest rate is low. This is a shrinking society.

Can it be perceived as a start of recession?

Let’s compare the current situation to the Great Depression in 1929. At that time, it was much more difficult than today, but at least no environmental problem existed and population kept on increasing. Technological development produced new demand. No high debt or oversupply existed. People were not as selfish as now. That is why I see the current situation not as a temporary change but as a structural transition.

Japan is the epitome of a shrinking society since it went through the “lost 20 years,” and its working-age population is gradually falling. How can you explain the labor shortage that is taking place in Japan?

Many say that the Japanese economy is reviving due to Abenomics, [the economic policies advocated by Shinzo Abe stressing on monetary easing, fiscal stimulus and structural reforms]. However, we should not forget that starting from 2008, Japan has expanded money supply through quantitative easing. When stock price falls, the Bank of Japan intervenes in the stock market. It is like supporting the economy and stock prices. However, the economy grew only 1.1 percent in 2018. The labor shortage originates from Japan’s population structure. Although the first and second baby-boom generations that totaled 20 million, including the Dankai generation, have retired, Japan has just recently started to accept foreign workers. Korea, whose economy is one-third of Japan’s economy, has 1.5 million foreign workers already. Japan’s labor shortage is only confined to substandard jobs.

In the initial stage of the fourth industrial revolution, it is impossible to stop jobs from getting destroyed. Yet it is nonsense to give up the revolution for fear of that. If the tipping point comes, it becomes a different story. The change might come after 50 years. Even if it is the same shrinking society, the difference will be remarkable between the countries that adapted well to the fourth industrial revolution and the countries that did not.

You said five years of golden time remain before we enter a shrinking society. Do you mean Korea?

Yes. People born in 1963 are the youngest of the first baby-boom generation of Korea, and they total 800,000. When these people become 60 and retire in bulk in 2023, the situation in which we have low growth, low consumption and low interest rates will become serious. Plus, along with household debt, welfare problems regarding poverty among the elderly will be one of the biggest tasks to solve in Korean society, aggravating the conflict between generations.”

What should the leaders of countries do right now?

Leaders are the ones who predict the future and set directions. Coming up with a policy and implementing it are better done by government officials or employees of big corporations. They should take charge of this.

When it is the leaders who have to implement the policy, problems emerge. Since society has been democratized, this kind of phenomenon has been repeated for decades. The leader of a country has to prepare for the future seeing at least 10 years farther than others, but the truth is that the leader only thinks about the five-year term right now. The most crucial part in regard to future is the change in the structure of population. First and foremost, the educational system has to change. The current educational institutions are not sustainable at all. The next presidential election has to be a competition between each candidate’s pledges and views for 2035.

Amid the trade war between the United States and China, Korea and Japan are caught up in the conflict. How should we deal with this?

Surrounded by big powers, Korea needs to maintain ambiguity to some extent. It is not desirable for political arenas or media outlets present to assert their clear stance alone. It is also crucial to elevate diplomacy. Abiding by basic human rights principles and actively participating in foreign aid are also necessary. We should not act like a parvenu in the global stage. If our diplomacy is strong, and we are acknowledged as a country with social capital, big powers cannot disregard us. In order to be like that, the leaders of our society should be wise.