1919 declaration to be displayed

1919 declaration to be displayed 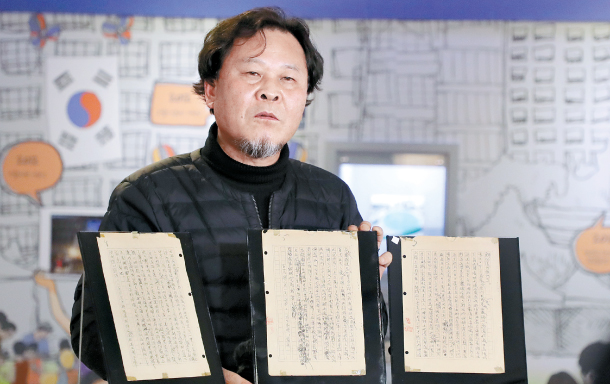 Cho In-rae, a descendant of Cho So-ang who drafted an early version of a Korean declaration of independence in 1919, unveils the handwritten draft of the declaration at the Seoul Metropolitan Library on Thursday. [YONHAP]

A handwritten draft of an early version of a Korean declaration of independence was unveiled for the first time Thursday as the country prepared to mark the centennial anniversary of the March First Independence Movement of 1919, which had peaceful nationwide demonstrations protesting Japanese colonial rule.

This is a draft of a declaration first proclaimed on Feb. 1, 1919, in Jilin Province, China, by 39 leaders of the Korean independence movement in Manchuria and Russia, penned by activist Cho So-ang (1887-1958).

The never-before-seen draft, handwritten by Cho, was shown to reporters by a descendant, Cho In-rae, who heads a foundation for his ancestor, at the Seoul Metropolitan Library, ahead of a public showing today.

This manifesto is not as well known as the Feb. 8 declaration by Korean students in Tokyo and the landmark Proclamation of Korean Independence of March 1, 1919, announced in Seoul and translated in various languages including English.

But the Feb. 1 declaration can be considered their precursor as the first version of a Korean independence declaration, ahead of the mass March 1 movement the following month.

Cho So-ang is the architect of the “Three Principles of Equality,” championing equity of the individual, ethnic groups and state, and in politics, economy and education.

The draft was said to have been completed in 1918, ahead of the March 1 movement, and Cho sought endorsement from Korean independence activists in Russia and Manchuria.

The three pages of the draft revealed by Cho In-rae shows text that was crossed out. This draft was said to have been preserved by Cho So-ang when he returned to Korea after its liberation from Japanese colonial rule (1910-45). The original draft was five pages, but two are missing. The Seoul Metropolitan Government plans to exhibit the draft of the declaration to the public today at City Hall’s eighth floor conference hall from 11 a.m. to 4 p.m. alongside a symposium marking the significance of the 100th anniversary of the declaration of independence.