Soldier who lost legs in mine blast is discharged

Soldier who lost legs in mine blast is discharged 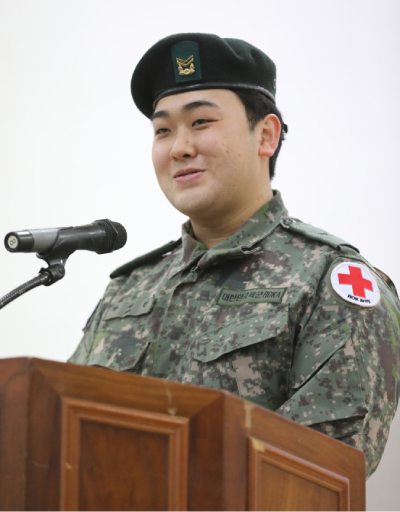 South Korea’s Army on Thursday held a ceremony marking the discharge of an acclaimed soldier who lost both his legs in a 2015 North Korean act of sabotage. The Army’s First Division hosted the event for Sgt. First Class Ha Jae-heon at its search unit in Paju, some 50 kilometers (31 miles) northwest of Seoul. Ha belonged to the unit at the time of the provocation and later moved to the Armed Forces Medical Command.

He was injured on Aug. 4, 2015, when a land mine, which the North planted inside the demilitarized zone (DMZ), exploded during a border search operation. One of his fellow soldiers also sustained injuries and had his right leg amputated.

After five years of service, Ha decided to leave the military to focus on his new career as a rowing athlete. Unbowed by his disability, he has dreamt of becoming a Paralympic gold medalist.

“It was all thanks to the support from citizens and you all that I have been able to overcome the difficult times,” Ha said. “I want to meet you later as a rowing gold medalist [...] I will do my best.”

In a congratulatory letter to Ha, Army Chief of Staff Gen. Kim Yong-woo expressed his appreciation for Ha’s contribution to the national defense. “You have overcome your injuries based on your indomitable will and military spirit and are blazing a new path as an athlete [...] This gives hope for other soldiers and citizens,” the Army chief wrote.

The land mine provocation occurred at the height of cross-border tensions. It stands in sharp contrast to current efforts for inter-Korean reconciliation.