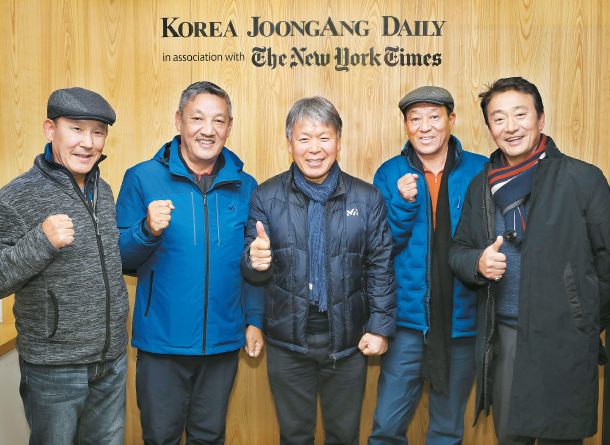 Five Nepalese educators visited Korea on the invitation of the Um Hong Gil Human Foundation, a Korean charity that has built 15 schools in Nepal.

The foundation, which was founded by renowned mountain climber Um Hong-gil in 2008, recently appointed six Nepalese as local advisers to help the non-profit organization provide better educational services in the schools it built. Gangalal Tuladhar, a former education minister of Nepal, was appointed along with figures in the tourism industry including Lhakpa Sonam Sherpa, chairman of Yeti Airlines and president of Thamserku Trekking, as well as Phintso Lama, president of International Trekkers and Everest Summit Lodge.

“We suffered in the last 20 years from political problems and earthquakes, and our government was not able to manage [to provide] proper education in the countryside,” said Sherpa during his visit to the Korea Joongang Daily on Thursday with three other advisers.

Also visiting the Korea JoongAng Daily was Um Hong-gil himself, who in 2007 became the first climber to ascend the 16 highest peaks on earth.

Um wanted to give back to the country in which he accomplished many of his climbing feats. Fifteen schools have been built, and more are on the way.