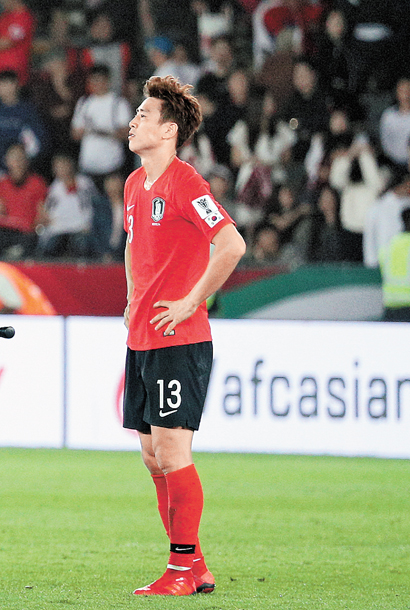 Ki Sung-yueng isn’t the only veteran hanging up his national team kit - the Korea Football Association (KFA) announced on Wednesday that Koo Ja-cheol will also be leaving the Taeguk Warriors.

After Korea’s quarterfinals match against Qatar at the Asian Football Confederation (AFC) Asian Cup on Jan. 25, Koo said, “This will be the last tournament that I’ll be playing in for the national team.”

Five days later, on Wednesday, the Korea Football Association (KFA) announced his retirement on social media. The announcement was quickly overshadowed when Ki also stepped down.

Although Koo’s recent performance has been a disappointment, his retirement is still a tough blow to fans as he has been a devoted player on the national team for 11 years.

Just like Ki, Koo also intended to retire last year as he had reached his limit in terms of balancing his club and national team duty. Even when Koo joined the national team after scoring goals for his German club, he would get injured when playing for the national team.

During Korea’s final World Cup qualification match against Uzbekistan on Nov. 16, 2016, Koo scored a winner in the 85th minute. Throughout the match, Koo played the full 90 minutes and ran a total of 11.283 kilometers (7 miles) despite pain in his calf. Once the match was completed, Koo was found to have ruptured his calf muscle.

Then, on June 28, 2018, after Korea’s final group match against Germany at the World Cup, Koo left the field limping. After the first half of the match, Koo’s knee was so swollen that he couldn’t bend down.

As this cycle of injury and recovery continued for years, Koo ultimately realized that he had to end his national team duty.

However, once head coach Paulo Bento was appointed, he extended his career until the Asian Cup as Bento visited Germany to persuade Koo to continue playing for the national team.

“I got courage after talking to head coach [Paulo Bento],” Koo said. “I wanted to help the national team. I wanted to win but we couldn’t make that happen.”

Having mostly played as a substitute player throughout the Asian Cup, Koo received a lot of criticism from fans. Koo appeared in 76 matches and scored 19 goals since debuting with the national team in February 2008. He competed at the 2014 and 2018 World Cups.

“At some point, I started to feel overwhelmed,” Koo said after the quarterfinals match against Qatar. “But I still tried my best whenever I joined the team. I am disappointed to have finished poorly, but I do want to tell myself that I worked hard all this time.”

Although he will no longer play for the national team, Koo will make headlines in the Bundesliga. Throughout nine seasons in the Bundesliga, Koo scored 28 goals in 199 matches. If he plays in another match, he will become the second-ever player to play in 200 matches in the German league.