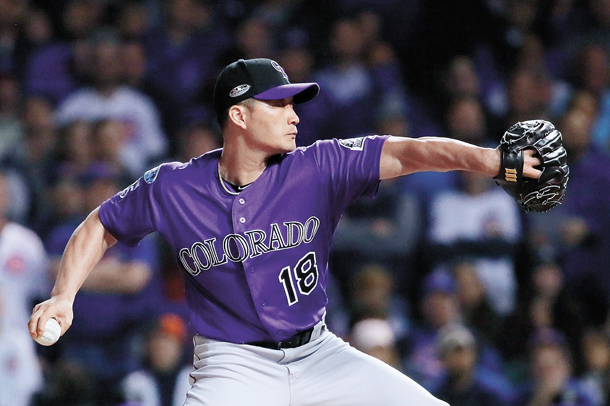 Oh Seung-hwan of the Colorado Rockies throws a pitch on Sept. 23, 2018. [GETTY IMAGES/YONHAP]

Oh Seung-hwan of the Colorado Rockies left for the United States on Wednesday for what could be the last season of his career in the majors.

Oh will start his preparation for the 2019 season by training with KT Wiz players in Tucson, Arizona, before moving to Scottsdale, Arizona, to join the Rockies. This will be his 15th year as a professional player and his fifth season in the major league.

“It always feels the same when I start the camp,” Oh said. “This winter, I’ve been resting and training. I feel better than any other season.”

As this is Oh’s last season before becoming a free agent (FA) player, the 2019 season could also be the last in the United States for the 36-year-old closer.

Oh, who made his KBO debut with the Samsung Lions in 2005, was a dominant closer in the Korean league, picking up 28 wins, 13 losses and 277 saves with a 1.69 ERA in 444 games over nine years in Korea. With Oh, the Lions won five Korean Series titles.

Following an impressive career in the KBO, Oh left for Japan in November 2013, signing a two-year contract at 990 million yen ($9.09 million) with the Hanshin Tigers. Oh’s contract was the biggest amongst Korean baseball players in Japan. He once again lived up to expectations, picking up four wins, seven losses and 80 saves with a 2.78 ERA over two seasons. In both of his seasons in Japan, Oh topped the Nippon Professional Baseball’s save standings.

But that wasn’t the highlight. Oh continued to advance, signing a one-year contract, with a club option for a second year, with the St. Louis Cardinals in January 2016.

Oh didn’t waste time in adjusting to the big league. In his rookie season in the majors in 2016, Oh’s numbers proved that he could be a top class bullpen pitcher in the United States, picking up six wins, three losses, 19 saves and 14 holds with a 1.92 ERA.

Following his impressive debut, Oh automatically extended his contract for another season as the Cardinals exercised its option.

However, Oh’s second season was nothing like his first, picking up just one win, six losses, seven holds and 20 saves with a 4.10 ERA. Although he hasn’t shown much difference in the speed of his fastball, Oh struggled significantly with his slider, which used to be considered his strength.

Once his contract with the Cardinals ended, Oh signed a one-year contract with the Toronto Blue Jays at $2 million with an option for a second year. By rotating between a set-up man and a closer, Oh picked up six wins, three losses, 21 holds and three saves with a 2.63 ERA for the Blue Jays. Despite his performance, Oh didn’t last long with the Blue Jays as he was traded to the Rockies in July.

Although he got traded to the Rockies while in season, he still finished strong by picking up two wins, eight holds and one save with a 2.53 ERA for the Rockies. As the Rockies advanced to the postseason, Oh became the first Korean to appear in a postseason game in Korea, Japan and the United States.

Throughout his four seasons in the major league, Oh picked up 13 wins, 12 losses and 42 saves with a 2.78 ERA. He is now only one save away from achieving his 400th career save.

Depending on Oh’s statistics this season, he may be able to extend his stay in the big league by signing another big contract or he may be returning to the KBO. As he will be in his late 30s, Oh’s statistics will be the only factor that will show clubs that he is healthy.

Although he mentioned his interest in returning to the KBO when he returned to Korea in October 2018, for now, Oh is hoping to play another solid season in the majors.

“I’ll think about my return once the season ends,” Oh said.

If Oh does return to the KBO, his only option would be to play for the Lions since he was never technically a free agent here. Additionally, Oh will face a 72-game ban for illegal gambling in 2016.