Local comedies turn out to be surprise successes: Moviegoers are opting for laughs over seeing another heavy big-budget drama

Local comedies turn out to be surprise successes: Moviegoers are opting for laughs over seeing another heavy big-budget drama

By its eighth day in theaters, “Extreme Job” had already sold more than 4.45 million tickets at the box office, following a record opening for a comedy title. [CJ ENTERTAINMENT]

“I went into theater without any expectations, but I ended up laughing so hard the whole time,” a 37 year-old graphic designer surnamed Nam said about the comedy “Extreme Job.”

He is not the only viewer who found himself surprised at his reaction to the hit film.

A rare comedy feature among the endless flow of dramatic winter blockbusters, such as the action-packed “Take Point” and crime drama film “The Drug King,” “Extreme Job” swept the country’s box office upon its arrival in theaters last week.

By its eighth day in theaters, the movie had already sold more than 4 million tickets, easily selling more than the 2.3 million it needed to break even. The data provided by the Korean Film Council showed the movie dominated the box office upon its release on Jan. 23, setting a new opening record for a comedy title, with 370,000 admissions sold. In a single weekend, it sold more than two million tickets, and the film is continuing to enchant moviegoers. On Wednesday, it secured the top spot from the newly released crime action title, “Hit-and-Run Squad” featuring a high profile cast that includes Gong Hyo-jin, Ryu Jun-yeol and Cho Jung-suk.

To do so, they open a chicken restaurant that does unexpectedly well, interfering with their investigation. The five-person team includes Chief Detective Go (Ryu), the hot-tempered Detective Jang (Lee Ha-nee) and rookie officer Jae-hun (Gong). 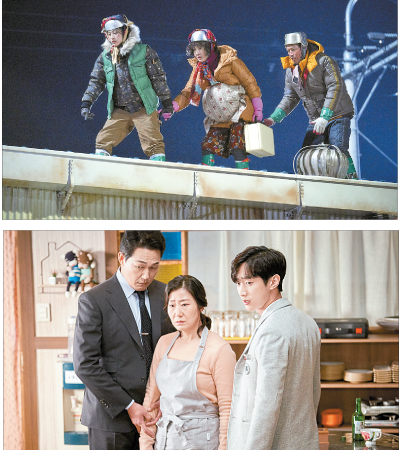 Scenes from the upcoming comedy feature “The Odd Family: Zombie On Sale,” left, and body-swap comedy movie “Inside Me.” [MEGABOX PLUS M, TCO THE CONTENTS ON]

The chemistry between the actors, backed by a well-written script, are seen as the major reasons for the film’s success. The script was co-written by the director and Bae Se-yeong, who is also behind the successful comedy remake “Intimate Strangers,” which sold 5.3 million tickets last year.

“Based on the original script from rookie screenwriter Mun Chung-il, Bae wrote most of the funny lines shown in the trailer,” the director told reporters at a press event held last month. “I also tried to write funny lines as if it was a competition.” Lee gained recognition for his scriptwriting following the success of popular titles like “Sunny” (2011) and “Speed Scandal” (2008).

Characters from “Extreme Job” and the actors’ acting are far from unfamiliar - the roles played by Ryu and Jin always seem serious, but they are in fact very sloppy. There is an angry detective who ceaselessly complains, played by Lee, and, of course, an excessively passionate rookie officer, played by Gong.

The film generates laughter from funny situations and wordplay by the five characters in the squad, instead of relying on slapstick comedy.

“There is nothing unprecedented about the characters or the acting,” said film critic Kim Hyung-suk. “But the movie is very faithful to providing laughter from familiar elements.”

The setting of the movie and its timely release also played essential roles to the film’s success.

“The setting of the movie generated many funny situations. The film’s release was also very timely. It has been quite a while since comedy movies that people can watch without much thought have been released. ‘Extreme Job’ came at a time when people started to feel tired of heavy movies trying to deliver resonating messages.”

Kim added, “Basically, Lee did what he does best - discovering a concept and creating funny situations from well-written characters instead of meticulously carving up details.”

Additionally, “Extreme Job” is not the only comedy movie to have been a hit with moviegoers so far this year.

“Inside Me,” a tale about a bullied and shy high school boy (Jinyoung) whose body gets swapped with a middle-aged gang member (Park Sung-woong), also had an impressive run at the box office. As of Wednesday, the movie - which features Jinyoung’s unexpected romance with the much older actor Ra Mi-ran - has sold more than 1.9 million tickets since its release on Jan. 9. This exceeds the 1.5 million tickets required for it to break even.

“Like ‘Extreme Job,’ ‘Inside Me’ also generates laughs from funny situations instead of slapstick humor,” said film critic Kim Heon-sik. “But while its target audience was teens and people in their 20s - thanks to Jinyoung at the center - the target audience of ‘Extreme Job’ is much broader with the appearance of the acclaimed [and widely-beloved] actor Ryu.”

Bucking the trend of big-budget blockbusters with a heavy social message hoping to surpass the 10 million ticket sale mark, distributors have begun to take notice of the changing tastes of audiences.

Kim Hyung-suk explained that people’s desire for more refreshing stories is natural due to the growing threat of streaming giants, such as Netflix, which provide much creative and original content.

Perhaps after sensing audiences’ changing tastes for movies, the lineup of films set to be released this year from major distributors is filled with comedy titles.

This month, two comedies are scheduled for release. Megabox Plus M’s “The Odd Family: Zombie On Sale,” set for release on Feb. 13, is a smaller budget comedy. Starring Jung Jae-young, Um Jee-won and Kim Nam-gil, the story revolves around a suburban family whose lives get disrupted after the elderly father gets bitten by a zombie. Instead of becoming a horror film, the movie takes a turn and opts for humor, starting with the bitten father suddenly getting younger.

Another feature expected to generate laughs is CGV Arthouse’s “Accidental Marriage” (working title), about a chaebol (Kim Dong-wook) who is forced to get married in order to inherit property. He decides to marry Ko Sung-hee’s character with the promise to stay married for three years. The film is scheduled to be released on Feb. 27.

“The reasons that people head to theaters these days have changed,” said Kim Heon-sik. He explained audiences these days simply want to enjoy the time they are watching the movie instead of being bombarded with the awkward combination of elements that are often considered necessary in order to dominate the box office.