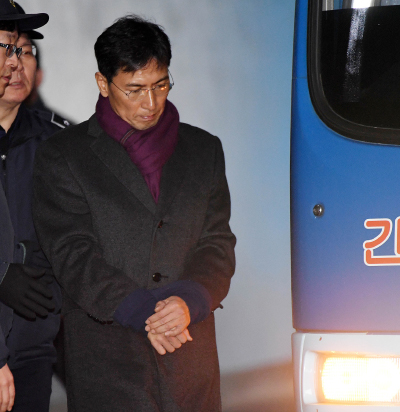 Former South Chungcheong Gov. An Hee-jung waits to board a prisoner transport vehicle that will take him to a detention center in Seoul on Friday after he was ruled guilty of rape and sexual assault. [YONHAP]

Former South Chungcheong governor and one-time presidential contender An Hee-jung was placed under immediate detention on Friday after a Seoul court sentenced him to three and half years in prison on charges of rape and sexual assault.

The verdict overturned that of a lower court and was the latest twist in a roller-coaster scandal that ensnared the highest-profile figure in Korea’s Me Too movement.

The Seoul High Court Friday afternoon ruled that An used his authority to force his former secretary, Kim Ji-eun, into an adulterous sexual relationship against her will from July 2017 to February last year.

Nine of the 10 incidents of sexual assault claimed by Kim were accepted by the court, which acknowledged that her disclosures in the case were “natural” and that she had no reason to falsely accuse An and would not benefit from his downfall.

“Kim’s testimony was consistent in its most important parts and contains details that could not have been given by one who had not experienced [the crimes],” the court said.

On the most serious issue in the case, the court said An used force to bend Kim’s free will and accept his sexual advances. The court said that An’s social position as governor and presidential hopeful were powerful enough to pressure Kim into submission. Kim first disclosed the accusations against An in a live interview with JTBC last March. Her case received immense publicity as it helped propel a Me Too wave that rocked Korean society last year. An was forced to step down as South Chungcheong governor days after Kim’s public accusation.

Yet An appeared to be vindicated last August when the Seoul Western District Court cleared him of the charges due to what it said was insufficient evidence provided in Kim’s testimony and particularly on the issue of whether force had been applied by An.

The verdict sparked a powerful backlash from local feminists who claimed it set back the country’s need to come to terms with sexual abuses and women speaking out.

One of An’s lawyers told the press that the verdict was “unexpected and incompatible with common sense” and the punishment too severe. An is expected to file a final appeal with the Supreme Court, which will have the final say over the ex-governor’s fate presumably within the year.

While An’s personal political fortunes are unlikely to rebound, Friday’s verdict also has political ramifications for his former party, the ruling Democratic Party (DP) and the Moon Jae-in administration.

This string of criminal accusations and convictions has placed the DP and the Moon presidency in their most vulnerable positions since taking power in May 2017. While An and Lee were not close allies to the president like Kim, all three were major presidential hopefuls expected the lead the party in the future. The party’s prospects for the upcoming 2020 elections, which only months ago looked exceedingly bright, are dimming by the moment as the opposition gears up for an all-out assault.