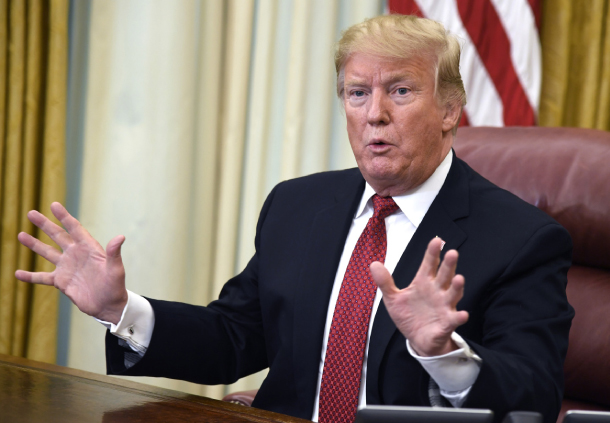 U.S. President Donald Trump said Thursday that a date and location, likely Vietnam, for his second summit with North Korean leader Kim Jong-un will be announced early next week.

On the same day, Stephen Biegun, the U.S. special representative for North Korea, called for Pyongyang to fully declare its nuclear and missile programs in a speech at Stanford University. He also said that Kim has committed to dismantling and destroying North Korea’s plutonium and uranium enrichment facilities.

Biegun will travel to South Korea Sunday for working-level talks with his North Korean counterpart, which will help fine-tune an agenda for the second Kim-Trump summit.

His remarks appeared to confirm Vietnam as the location of the meeting, but it remains to be seen if the Southeast Asian nation’s capital Hanoi or resort coast city Da Nang will be selected as the final venue. In the first North-U.S. summit on June 12 last year, the North Korean and U.S. delegations stayed in separate hotels in downtown Singapore and commuted by car to the Capella Hotel on Sentosa Island on the day of the talks.

Trump will likely make the announcement in his State of the Union speech scheduled for Feb. 5.

Biegun is expected to meet next week with his new North Korean counterpart, Kim Hyok-chol, a former ambassador to Spain.

The working-level talks are expected to take place at the truce village of Panmunjom at the inter-Korean border as early as Monday, according to Seoul sources.

The U.S. State Department said in a statement Thursday that Biegun, after meeting with Lee, will have “follow-up meetings with his North Korean counterpart to discuss next steps to advance our objective of the final, fully verified denuclearization of North Korea and steps to make further progress on all the commitments the two leaders made in Singapore.”

Choe Son-hui, the North Korean vice foreign minister, has previously been named as Biegun’s counterpart for working-level talks. But she is not completely out of the picture and it appears that she will be taking more of an oversight role, according to Seoul sources.

Ahead of the trip, Biegun said in his speech at the Stanford Walter H. Shorenstein Asia-Pacific Research Center, “Before the process of denuclearization can be final, we must also have a complete understanding of the full extent of the North Korean weapons of mass destruction missile programs.”

This would be attained “at some point through a comprehensive declaration” and would enable “expert access and monitoring mechanisms of key sites to international standards.” It will ultimately ensure “the removal and destruction of stockpiles of fissile material, weapons, missiles, launchers, and other weapons of mass destruction,” he added.

Kim Jong-un, during a visit by U.S. Secretary of State Mike Pompeo to Pyongyang in October, committed to allowing access to international experts to verify the complete destruction of the Tongchang-ri missile engine test site and Punggye-ri nuclear test site.

He said that the “complex of sites that extends beyond Yongbyon [nuclear plant] represents the totality of North Korea’s plutonium reprocessing and uranium enrichment programs.”

The details, Biegun said, will be discussed in his upcoming working-level talks with his North Korean counterpart. Such issues will need to be addressed in a denuclearization roadmap in order to “put in place the necessary conditions to fundamentally transform U.S.-North Korean relations and establish a permanent peace” on the Korean Peninsula, Biegun said.

But Biegun admitted that the North and the United States “do not have a specific and agreed definition” of final, fully verified denuclearization (FFVD) or comprehensive, verifiable, irreversible denuclearization (CVID).

Washington’s view, he said, “entails the elimination of the totality of the weapons of mass destruction programs in North Korea, consistent with the requirements of international law,” along with the means of their production and delivery, namely intercontinental ballistic missiles (ICBMs).

The diplomat had been a part of a delegation to Washington in January led by Kim Yong-chol, North Korea’s vice chairman of the ruling Workers’ Party’s Central Committee, to deliver a letter from leader Kim Jong-un to Trump.

Biegun elaborated that their discussion was “productive, focused, results-oriented, and it laid out the first steps in a plan for comprehensive working-level negotiations ahead.”

Trump, he added, “expects significant and verifiable progress on denuclearization, actions that are bold and real, to emerge from that next summit.”

Biegun also said that should North Korea follow through on its commitment to complete denuclearization, “the United States will in return exceed anything previously thought possible.”

Washington, he said, is “prepared to pursue - simultaneously and in parallel - all of the commitments our two leaders made in their joint statement at Singapore last summer,” and plans for “new opportunities that will open when sanctions are lifted and the Korean Peninsula is at peace, provided that North Korea likewise fulfills its commitment to final, fully verified denuclearization.”

He also dangled the prospects of “robust economic development” for North Korea.

“This bright future, driven by investment, external engagement, and trade and built with the incredible resources of the Korean Peninsula is also part of our strategy to plan for success,” he said. “At the appropriate time, with the completion of denuclearization, we are prepared to explore with North Korea and many other countries the best way to mobilize investment, improve infrastructure, enhance food security, and drive a level of economic engagement that will allow the North Korean people to fully share in the rich future of their Asian neighbors.”

The core of Trump’s “vision for U.S.-North Korea relations” is “prosperity, along with denuclearization and peace,” he added.

Biegun further rejected speculation that any sort of “trade-off” in which the United States would agree to withdraw troops from South Korea as a concession to the North has been discussed.

Trump is “ready to end this war,” said Biegun, likely hinting at a declaration to end the 1950-53 Korean War, which ended with an armistice agreement, not a peace treaty. He continued, “We are not going to invade North Korea. We are not seeking to topple the North Korean regime.”

Biegun also said, “I am absolutely convinced, and more importantly, the president of the United States is convinced, that it’s time to move past 70 years of war and hostility in the Korean Peninsula,” saying this has bipartisan support in the United States.

Dan Coats, the U.S. director of national intelligence, told Congress on Jan. 29 that North Korea was unlikely to give up all of its nuclear weapons and has continued with activity inconsistent with its pledges to denuclearize. This prompted Trump to criticize his intelligence officials, telling them “go back to school” in a series of tweets on Jan. 30, while adding, “I look forward to seeing Kim Jong Un shortly. Progress being made-big difference!”

Trump then tweeted on Friday that he had a meeting with his intelligence team who told him “that what they said on Tuesday at the Senate Hearing was mischaracterized by the media - and we are very much in agreement on Iran, ISIS, North Korea, etc.”

A senior South Korean Foreign Ministry official said, “So long as North Korea raised the dismantlement of the Yongbyon nuclear site, this will likely be prioritized before tackling other issues” in the North-U.S. denuclearization talks.

The official said that, over the next month until the summit, the two sides “will likely focus on ironing out the details of the steps toward denuclearization and corresponding measures.”