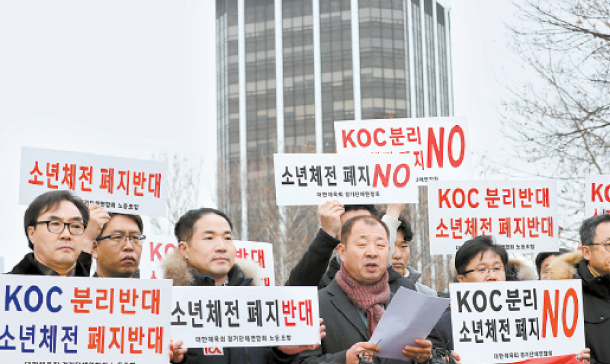 Korean Sport & Olympic Committee (KSOC) officials and union members hold signs in Seoul on Jan. 31 to protest the government’s plan to separate the national Olympic committee from the KSOC. [YONHAP]

The Korean government and the country’s top sports organization are expected to engage in a long tug-of-war over the separation of the national Olympic body, following the Sports Ministry’s reform plans announced last month.

After a series of sexual assault claims in the sports community stunned the nation, Sports Minister Do Jong-hwan unveiled plans to wipe out misconduct in sports and overhaul Korea’s elite sports system last Friday, which some criticized as a reason behind recent scandals.

One plan is to divide the Korean Sport & Olympic Committee (KSOC) to ensure balanced growth of elite sports and recreational sports. Presently, the KSOC oversees both areas.

The KSOC also serves as the national Olympic committee (NOC) of Korea. But under Do’s plan, the government apparently wants to separate the NOC arm from the KSOC.

The history of the KSOC dates back to 1920, when the Korea Sports Council (KSC) was established. South Korea’s national Olympic committee was established in 1946. The two entities went through a merger and separation process many times in the past, and became the single body named the Korean Olympic Committee (KOC) in 2009.

The KSOC got the current name after the KOC merged with the Korea Council of Sport for All (Kocos), a sports organization that managed daily and recreational sports policies in the country, in 2016.

Do said the ministry will review separating the KOC from the KSOC and will let the former be responsible for elite sports athletes pursuing medals in international competitions, such as the Olympic Games and the Asian Games.

If the plan is realized, that means the KSOC needs to focus on managing local sports events and promoting recreational sports, considered unpopular and less lucrative.

The KSOC is strongly opposed to the government’s idea. At a KSOC board meeting on Thursday, officials slammed the government for pushing its plan without deep consultation with the sports community.

“It only looks like the government is pressuring KSOC President Lee Kee-heung to resign,” the official said, on condition of anonymity. “There are no actual benefits gained from the separation of the KOC and the KSOC.”

The KSOC officials claimed there will be serious conflicts like in the past when the KOC was a separate body. They also insisted it’s a global trend for an NOC to oversee both elite and recreational sports in the country.

Those who support the government believe the separation of the KOC from the KSOC will give the Sports Ministry more power in controlling and guiding the country’s top sports body.

The KSOC has been using the government budget, but the Sports Ministry hasn’t really had power to control the organization since the International Olympic Committee (IOC) doesn’t allow a government to pressure its NOC. But by separating the KOC from the KSOC, the government can have more authority to check whether the sports body is operating properly.

However, history shows the government’s plan may face a strong backlash from the sports community. The government previously pursued separating the NOC in 2005 and 2008.

“Our board members said the government should not rush to implement its reform plans,” KSOC chief Lee Kee-heung said. “We’ll have to find ways to make improvements, but the KOC should not be separated from the KSOC. We must have proper discussions before reaching any conclusions.”