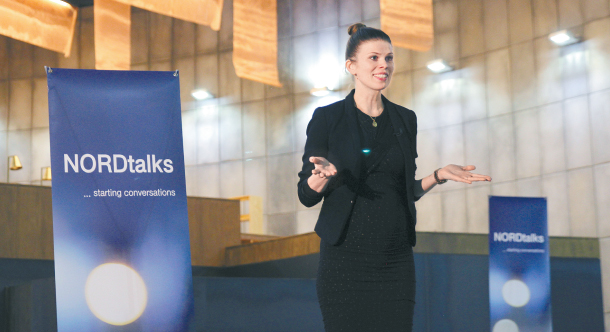 Louise Fredbo-Nielsen, an author and a futurist from Denmark, speaks at “NORDtalks 2019: Education and Employment in the Fourth Industrial Revolution,” a three-part series organized by embassies of Nordic countries in Korea at the Oil Tank Culture Park, western Seoul, Jan. 31. [EMBASSY OF DENMARK IN KOREA]

A group of Nordic countries celebrated 60 years of diplomatic relations with Korea by holding a series of talks on education and employment in the so-called fourth industrial revolution and the Nordic experience with innovation.

“The NORDtalks is a project executed by Nordic embassies in Korea,” Ambassador of Norway to Korea Frode Solberg told an audience at the Oil Tank Culture Park, western Seoul, Jan. 31. “Three of five Nordic countries [represented in Korea] are celebrating 60 years of diplomatic relations with Korea, and while each embassy will be hosting different events, this is part of the celebration.”

The three countries are Norway, Sweden and Denmark.

“What does it mean to be a Nordic?” asked Swedish Ambassador to Korea Jakob Hallgren. “We are 27 million people, approximately half of Korea’s population, and we are in five countries in a vast territory in northern Europe who share common values and a way of life.”

The talks are a three-part series to be hosted throughout the year as an introduction to the Nordic way of life and thinking. The first was held on Jan. 31 in an auditorium at the Oil Tank Culture Park, an oil depot turned into a park. It focused on education and employment in the fourth industrial revolution.

“If you read some of the headlines in the news about the future, they speak of how robots may steal as many as 800 million jobs in the next 13 years, and that robots are coming into our lives sooner than you think,” said Louise Fredbo-Nielsen, an author, as well as a futurist, whose expertise is in future studies. “So we all get a little scared if this is all we are hearing all the time.

“But the thing is,” she said, “there is no data that is showing the complete picture. MIT gathered research on the future of the labor market, and as you can see in the results, no one agrees.” 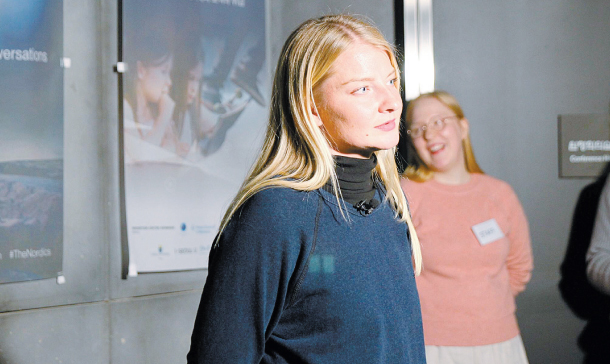 Karolina Miller, a Finnish program director at Emerge, an interational tech conference in Minsk, Belarus, and former CEO of Startup Sauna, speaks at the NORDtalks conference. [EMBASSY OF DENMARK IN KOREA]

A recent study by the American university showed the number of jobs created or lost due to developments in the fields of robotics and artificial intelligence (AI) all varied, sometimes in the millions, and that no study could agree on a projection.

But to turn a blind eye to changes in the world is not a solution.

“You have to see what is changing and decide what it is that you have to do, instead of closing your eyes to the changes,” Fredbo-Nielsen said. “The future is something that we are creating - it is not just going to happen to us.”

What we can do, she said, is to concentrate on human values.

“Being human is always going to be relevant - we humans are really good at being curious and having empathy, which is going to be very important in the future,” she said. “We are good at being lazy and making mistakes - and it is important that we dare to make mistakes and it is important that we allow ourselves to experiment and do something even though we don’t know what the result will be.”

The audience at NORDtalks also heard from Karolina Miller, former CEO of Finnish accelerator Startup Sauna, who jumped into entrepreneurship after a career in journalism.

“Entrepreneurship is not something to be learned at school - it has to be embraced through failures,” said Miller, who is now a program director of Emerge, an international tech conference in Minsk, Belarus. “My story isn’t anyhow unique - there are people like me without prior experience in start-ups joining [the sector] on a yearly basis. For many people running the organizations, your degrees, diplomas, don’t matter as much because we operate in an ever-changing world. We are much more interested in your passion and grit.”

The Korea JoongAng Daily sat down with the former journalist-turned-entrepreneur to ask about her experience with start-ups in Finland and also her take on education and innovation in Korea and Finland. The following are excerpts of the interview. 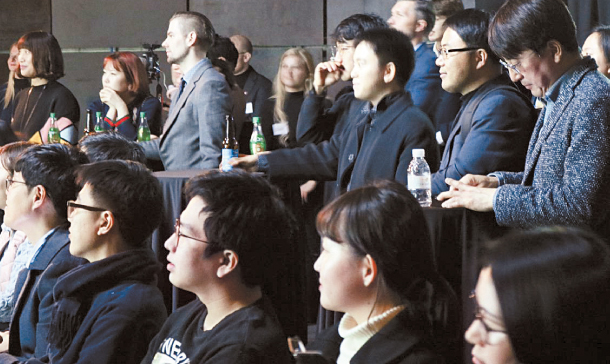 An audience listens to the speakers at the NORDtalks conference. [EMBASSY OF DENMARK IN KOREA]

Q. How did you go into start-ups after a career in journalism?

A. As mentioned, I was working as a journalist. It was a lot of fun, but to be honest, the media field was changing a lot as you probably know. Especially in Finland, we have such a small market. I saw there were not that many jobs and those jobs that were there were not the best. It was just a lack of opportunities. I was not very hopeful and at the same time we had this buzz around start-ups. People were very excited and I just got very curious. Then I came across a marketing position and I decided to jump in and see what it was all about just out of curiosity, and it sucked me in.

Are there any skills that you picked up from journalism that you find yourself using as an entrepreneur?

Yes, for sure. It is a lot about pitching - pitching for a start-up, pitching for an accelerator, pitching new directions in which the accelerator needs to go. Essentially it is storytelling and journalism is based on storytelling - like what is this product needed for? Why is it useful for them to package the story in an attractive way for investors and customers? Those skills [that I had picked up at a journalist] were very much needed.

How do you assess the start-up culture here?

I was here for the first time in September 2017. I was extremely impressed by the talent, how sophisticated the products were. But at the same time, I saw companies that already had a polished product and a big team. They were almost like a factory and had raised a little funding, but they did not have any customers. It is good that there was capital around, but there should first be a proof of concept and business before [one decides to invest] in a company. That sometimes gives a false picture of the potential of the start-up. But overall I am very impressed.

The Seoul city government has a number of initiatives to draw international start-up companies to the city. Do you have an advice on creating the right ecosystem for start-ups?

First of all, if you want to attract international talent here, definitely increasing English-speaking services in a way, like how Singapore and Hong Kong have English as the second main language. For what I have understood [Korea] has a lot of spaces to provide, but also some mediators, fixers, I like to call them - people who can actually show you how to operate in the bureaucratic jungle. You often need someone from the inside to teach you how to operate. If you are coming from outside of Korea, you need to understand what their customer acquisition channels are, how to reach out to the people. Is it social media? Which social media is it? Do you need to go to these events, fairs? Hiring locally is a huge bottleneck in the journey of a start-up.

Finland is a country known for its innovative educational system for the young. A number of universities in Korea have established so-called creativity centers and programs. Do you believe such initiatives are effective?

I think it is amazing that universities are building these centers and starting these creativity programs. My question is how bottom-up are they? Is it something that is forced upon students or is this initiative coming up from the bottom-up? Is it based on a real need and is it something that the students really want? Because I have seen this kind of creativity center, not necessarily in Korea, but somehow they are standing half-empty, nothing is really happening there.

I definitely feel it is an opportunity, but it is more about figuring out how to embrace this opportunity. I used this as an example of what we are doing in Finland. We are seeing a rise of AI, and one Finnish initiative was to teach AI to as many Finns as possible. So the goal was to teach AI to 5 percent of the whole population. The idea was, perhaps we will not be able to be the world’s leading AI [nation], research-wise, but at the same time we would have most of our population understanding how this technology actually works.

Again, in Korea, I do not think it is a good idea that you have [only] a small fragment of people knowing about new technologies and their opportunities. I think we should have more philosophers and social scientists understand what you can do with all these technologies and implement them in everyday life.

Tell us about a time you felt that you have failed as an entrepreneur. How did you find the drive to keep doing what you did or find something new?

When I started at Startup Sauna, I did not have any prior knowledge or experience in working with start-ups. I was terrified of the whole thing. It was a very rocky learning path and each time I made a big mistake, I would keep telling myself, “That was so stupid, so stupid.” And then my colleagues or mentors would come up to me saying: “Great, you learned something now.” Actually once I said something stupid in an interview. It was a big publication and it got published in print. They changed it afterwards on the online version, but the print version was still out there and all the people working in Finnish start-ups saw it. But again, I had the most supportive colleagues coming up to me and telling me, “Great, you learned something.”

Do you have any advice you want to give college graduates here in Korea, who feel like they have chosen the wrong major or do not know what to do with their lives coming out of college?

I have changed my trajectory so many times and it probably will still change. The change is coming, the change is already here and it will change hundreds of times just in the time we are alive. Instead of being afraid of things, be curious, go and study things. If you are not able to land your dream job, it is not the end of the world. Go and learn another useful skill in your field, go learn a language, go travel, meet like-minded people. Success, however you define success, will not happen overnight: Just stay curious and stay humble. Eventually you will end up [where you want]. I have been hiring some people and, to be honest, I do not really look at the school diplomas. For me, the passion, the drive and the attitude, and being able to execute something in a very short time are much more important. Everything you do extra-curricularly is always a plus. If you look at CVs, everyone has a degree. What is so fancy about a degree? I do not understand why people get so obsessed with it. People hiring want to know who you are as a person and what your passions outside work are. Essentially, everyone wants to work with nice people who create a nice atmosphere.