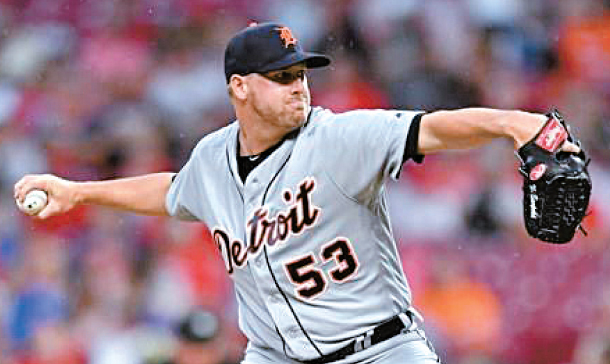 After spending part of the past three years with the Detroit Tigers, Australian right-hander Warwick Saupold has found a new home with the Hanwha Eagles in the KBO.

His address has changed, but the 29-year-old recently said his approach on the mound will always be the same.

“My goal is to get as deep into the game as possible and to try to throw into the seventh, eighth and ninth innings, and give my team a chance to win every game,” Saupold said last Thursday before leaving for the team’s spring training site in Okinawa, Japan. “If I can do that, I’ll be happy, and I am sure Hanwha’s supporting base and coaches will be happy too.”

The Eagles made the postseason last year, ending an 11-year drought from meaningful games in October. But after getting knocked out of the first round, the Eagles decided to bring fresh faces to the rotation, with Saupold and Chad Bell coming in for Keyvius Sampson and David Hale, himself a midseason replacement for Jason Wheeler.

The Eagles’ decision not to re-sign Sampson was somewhat of a surprise, since the right-hander led the KBO with 195 strikeouts.

But while he was racking up strikeouts, Sampson ran his pitch counts high. He pitched seven innings or more just six times in his 30 starts.

The Eagles wanted an innings eater and may have found one in Saupold, who described his pitching style as inducing “early contact, throwing strikes, getting deep in the game.”

“That’s the goal of starting pitchers: to throw as many innings as you can,” said Saupold, who has 70 strikeouts in 106 2/3 big league innings. “Big shoes to fill [with Sampson’s departure,] but I am looking forward to trying to fill them. Obviously, I am a different kind of pitcher.”

Other than trying to pitch deep into games and save his bullpen, Saupold said he has no other specific goal for himself.

“This is a team game. If I wanted to worry about myself, I’d probably play golf or tennis,” he said. “I love being in the team atmosphere, and the ultimate goal is to win the championship. At the end of the year, I want to be holding that trophy up and giving Hanwha what they deserve.”