A sharing factory is opened in Seongsu-dong. The factory aims for a win-win in a neighborhood of trendy restaurants and small-sized eateries. A Johncook Deli Meats factory will be opened on the second floor in February. [LEE DO-EUN, WECOOK]

In Seongsu-dong, sometimes called the Brooklyn of Seoul, the Seongsu Yeonbang shopping complex may become known for an unusual reason: It is home to a number of small food “factories.” Within the distinctive red brick structure, Johncook Deli Meats, Xiao Zhan and Index Caramel churn out their goods.

Johncook Deli Meats and Index Caramel sell their output right there on-site. Xiao Zhan, a Taiwanese restaurant brand, supplies dumplings made at the shopping complex to its two restaurants in Seoul.

OTD Corporation, owner and operator of food courts at office buildings and in malls in Seoul, is promoting the idea of small-lot manufacturers utilizing a common space. This month, the company will open a similar business, one that specializes in bread, in Myeongdong, central Seoul.

According to domestic law, food start-ups or small-sized eatery brands need a license to manufacture food and sell the products made through a third-party retailer. The problem is that for small-scale businesses, the qualifications are extremely difficult to meet.

A good example is May Bell Bakery, a local establishment in Itaewon, central Seoul. Revenues for the store increased four- to five-fold after it began selling its products through Market Kurly, an e-commerce site. Yet the success didn’t last. The company had to discontinue sales after it was found it didn’t have the right approvals to manufacture food.

For smaller eateries, the shared-manufacturing model can be a solution to this problem. Xiao Zhan was considering expansion through franchises and online when it came across the plan for OTD’s shared space. It recently signed a five-year contract to be part of the project.

“In order to run both offline and online stores, the factory has to be close to Seoul, but it was hard to find a place that could qualify for government approval,” said Xiao Zhan CEO James Kwon. “The fact that we could use a factory with a low investment is already a big advantage for us.” 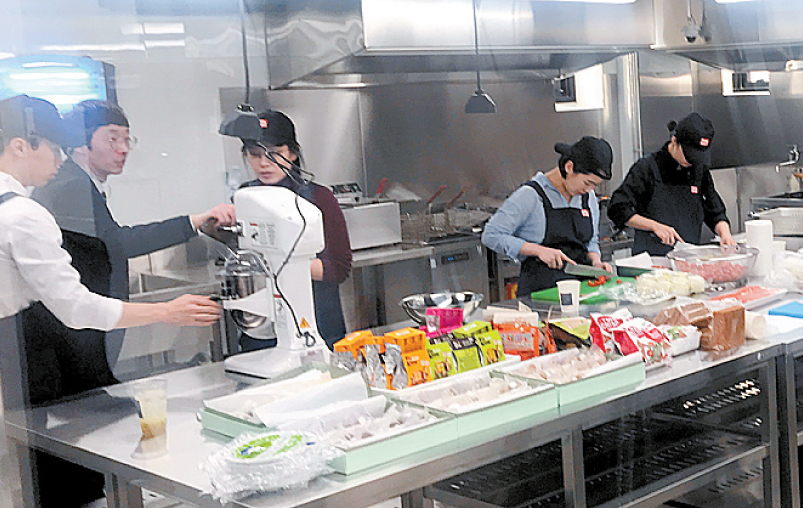 Employees from the start-ups prepare food in the shared kitchen. [LEE DO-EUN, WECOOK]

The shared bread factory is to open in Myeong-dong this month and will make bread for local baked-good shops on consignment contracts. Among them are local brands, such as Taegeukdang and Le Pain. The collaboration will not only be about offering the products. Staff from the respective brands will come to the kitchens to advise and consult.

“This model not only elevates the efficiency of bread production for these small brands, but it is also a way to solve the problem regarding retailing their products online,” said OTD Corporation CEO Son Chang-hyun. “In the shared factory, distributing refrigerated products can be made possible as well, which would be more difficult if these brands separately operate factories of their own.”

The shared kitchen is an emerging model that helps small food brands. Facilities are fully-equipped and made available to individuals or startups. Wecook, which operates shared kitchens, opened a new branch in Sajik-dong, central Seoul, on Jan. 25, and decided to sell some of the products made in the kitchen.

This practice does not violate domestic law because Wecook received approval for food manufacturing.

“There are many companies that aim to sell their products online, but even for them testing food in a brick-and-mortar store is important in order to get direct feedback from customers,” said Kim Ki-woong, CEO of Wecook.

Experts also point out the sharing platform is a new way for small food makers to adapt in a changing society.

The boundary between restaurants and food manufacturing is quickly disappearing. For food businesses to survive, they have no choice but to adopt efficient production systems.

“If it is a real sharing facility where multiple brands participate, the labor force can be run effectively,” said Moon.