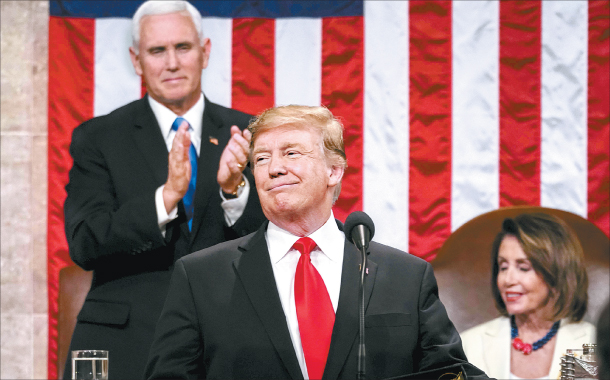 U.S. President Donald Trump delivers the State of the Union address at the U.S. Capitol in Washington, Tuesday. Vice President Mike Pence and Speaker of the House Nancy Pelose watch in background. [AFP/YONHAP]

The second U.S.-North Korea summit will be held in Vietnam on Feb. 27 and 28, U.S. President Donald Trump announced Tuesday in his State of the Union address.

“We continue our historic push for peace on the Korean Peninsula,” said Trump at the Capitol in Washington. “Our hostages have come home, nuclear testing has stopped and there has not been a missile launch in 15 months.”

Trump claimed that if he hadn’t been elected president, the United States would have gone into a “major war” with the North.

“Much work remains to be done, but my relationship with Kim Jong-un is a good one,” he said, adding, “Chairman Kim and I will meet again on Feb. 27 and 28 in Vietnam.”

It was the first time Trump has mentioned the date and host country for his second meeting with Kim, following up on their first summit last June 13 in Singapore.

Hours before Trump made his second State of the Union address, his special representative to North Korea, Stephen Biegun, arrived in Pyongyang for talks with North Korean officials to hammer out details for the second Trump-Kim meeting.

Biegun took a plane from the U.S. Air Base in Osan, Gyeonggi, at around 9 a.m. Wednesday and arrived at Pyongyang’s Sunan International Airport about one hour later.

The U.S. State Department had said Monday that Biegun would meet with his North Korean counterpart, Kim Hyok-chol, to prepare for the second summit and try to make progress on the commitments Trump and Kim made last year in Singapore: complete denuclearization, transforming U.S.-North relations and building a lasting peace on the Korean Peninsula. A South Korean diplomatic source with knowledge of Pyongyang-Washington discussions said Biegun was arriving in North Korea with a flexible schedule, saying he could leave early if talks fail to bear fruit, or stay for at least two days if they are productive.

Trump allocated 56 seconds to North Korea Tuesday in his 82-minute State of the Union address. A U.S. government source told the JoongAng Ilbo that it is customary for U.S. presidents to mostly talk about domestic issues in their annual messages, brushing off speculation that President Trump was sidelining the denuclearization issue.

What was conspicuously missing from Trump’s mention of his second meeting with Kim, however, was where in Vietnam the summit would actually take place.

Citing a source familiar with the summit’s planning, CNN reported the host-city in Vietnam is still being discussed between the two countries. North Korea reportedly favors its capital, Hanoi, given it has an embassy there. But the United States favors Da Nang because Trump attended a meeting of the Asia-Pacific Economic Cooperation there in 2017, meaning the United States has already conducted a full security check.

Vietnam is also an economic model the Trump administration wants to recommend to North Korea. It has promised it could develop economically like Vietnam if it foreswears its nuclear weapon program.

It was not immediately known why Trump was planning to meet with Kim for two days when their summit last June lasted a single day.

Trump did not directly call out South Korea in his Tuesday speech, but he did accuse other treaty allies - members of the North Atlantic Treaty Organization (NATO) - of failing to pay their “fair share” of defense costs.

“For years,” said Trump, “the United States was being treated very unfairly by friends of ours, by members of NATO, but now we have secured a $100 billion increase in defense spending for NATO allies.”

The comment was a red flag for South Korea because Seoul and Washington are in talks to renew a cost-sharing agreement to maintain 28,500 U.S. troops stationed in South Korea. The Trump administration has been pushing Seoul to pay more, and is only agreeing to a one-year extension of the next deal.

Blue House spokesman Kim Eui-kyeom said Wednesday following Trump’s address that South Korea’s presidential office “welcomes” the fact that the United States and North Korea decided on a date and host country for their second summit, and that it hopes both countries make “more specific and substantive progress” in Vietnam.

Spokesman Kim continued that Seoul hopes Vietnam serves as a “good background” for the United States and North Korea to “write a new history” together, pointing out that the United States used to aim “knives and guns” toward Vietnam during the Vietnam War, but has now become good friends with the nation.

Asked whether South Korean President Moon Jae-in planned to go to Vietnam while the second U.S.-North summit was being held, Kim replied that “the possibility is not high” at this point, though whether he’ll actually go “relies on how North-U.S. negotiations progress.”

Moon had hoped to join the first summit last June to sign a formal declaration ending the 1950-53 Korean War - which ended in an armistice, not a peace treaty - but that plan fell through as the White House didn’t want to give the carrot to Pyongyang too soon.

As the Blue House hopes the second U.S.-North summit revives Moon’s sagging approval rating and sheds new light on Seoul’s role as mediator, South Korea’s main opposition Liberty Korea Party (LKP) expressed frustration Wednesday that the second summit was about to be held on the same day as their national convention, through which the party is planning to elect its chairperson.

Park Kwan-yong, head of the party’s election commission for the event, told the JoongAng Ilbo that chances were high the national convention might be overshadowed by the second U.S.-North summit if the party pushes ahead with its plan to hold the convention on Feb. 27. For that reason, Park continued, he asked the party’s secretariat to review changing the schedule.

The LKP knows all too well what it can lose from a U.S.-North summit. The first summit was held a single day before South Korea’s general elections last year, which ended in a major defeat for the conservative LKP as approval ratings for Moon and the ruling Democratic Party (DP) shot to record-highs.

Hong Joon-pyo, the former chairman of the LKP who threw his name in the hat for re-election this month, wrote on Facebook Wednesday that he hopes the Korean people realize how the Moon administration is trying to sabotage the LKP’s national convention by having the second U.S.-North summit held on the same day, and that he was “enraged” by the fact that the government was using the denuclearization issue as a PR “scheme” when 50 million lives in South Korea were at risk. Hong asked the LKP to consider postponing the national convention by at least one month because the Moon government will try to have North Korean leader Kim Jong-un visit Seoul right after he sees Trump.