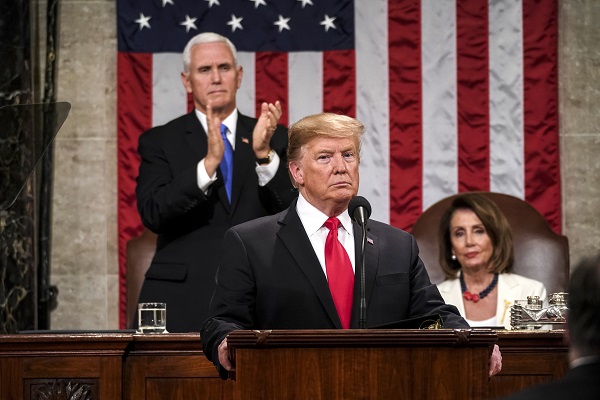 U.S. President Donald J. Trump, center, delivers the State of the Union address in front of Vice President Mike Pence and Speaker of the House Nancy Pelosi at the Capitol in Washington D.C. on Tuesday. [POOL/YONHAP]

The second U.S.-North Korean summit will be held in Vietnam on Feb. 27 and 28, U.S. President Donald Trump announced Tuesday in his State of the Union address.

“We continue our historic push for peace on the Korean Peninsula,” said Trump. “Our hostages have come home, nuclear testing has stopped and there has not been a missile launch in 15 months. If I had not been elected president of the United States, we would right now, in my opinion, be in a major war with North Korea.”

The White House chief went on, “Much work remains to be done, but my relationship with Kim Jong-un is a good one,” adding, “Chairman Kim and I will meet again on February 27 and 28 in Vietnam.”

It was the first time Trump has mentioned an exact date and location for his second meeting with Kim, following up on their first summit last June in Singapore.

Hours before Trump made his second State of the Union address, his special representative to North Korea, Stephen Biegun arrived in Pyongyang for talks with North Korean officials to hammer out details for the second Trump-Kim meeting.

Biegun took a plane from the U.S. Air Base in Osan, Gyeonggi, at around 9 a.m. on Wednesday and arrived at Pyongyang’s Sunan International Airport about one hour later.

The U.S. State Department had said Monday that Biegun would meet with this North Korean counterpart, Kim Hyok-chol, to prepare for the second summit and try to make progress on the commitments Trump and Kim made last year in Singapore: complete denuclearization, transforming U.S.-North relations and building a lasting peace on the Korean Peninsula.