75% of mid-January’s fine dust came from outside Korea

75% of mid-January’s fine dust came from outside Korea 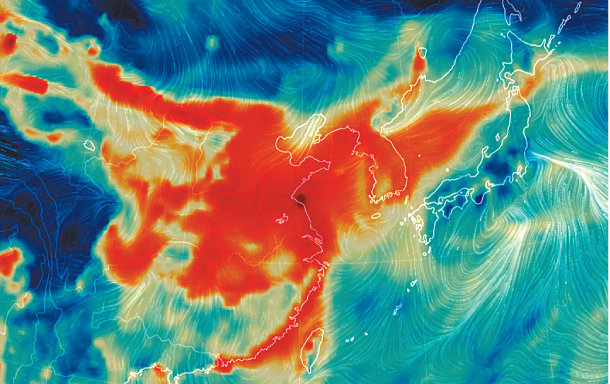 Satellite imagery shows a distribution chart of ultra fine dust (in red) over China and the Korean Peninsula at 2 p.m. on Wednesday. The image was captured from earth.nullschool.net. [NEWS1]

A think tank run by the Ministry of Environment announced Wednesday that around 75 percent of the fine dust that enveloped the nation from Jan. 11 to 15 came from abroad, particularly China.

Korea’s National Institute of Environmental Research (NIER) analyzed its data on PM2.5 fine-dust particles in the air during the five days in January. It said it used data collected on the ground in Korea and ran it through its internal air quality modeling program to deduce the percentage.

The air quality in and around Seoul continued to worsen from Jan. 11, hitting a record level on Jan. 14. On that day, the average level of PM2.5 particles across Seoul, Gyeonggi and Incheon peaked at 122 micrograms, the highest recorded since 2015 when the Environment Ministry started collecting data on fine dust.

PM2.5 particles are particles less than 2.5 micrometers in diameter and about 30 times smaller than the width of a human hair.

The World Health Organization (WHO) describes them as carcinogenic since PM2.5 particles can travel through the respiratory tract and reach the bloodstream, causing lung cancer and other lung conditions, as well as heart conditions and strokes. The WHO recommends daily exposure of no more than 25 micrograms of PM2.5.

NIER found that 69 to 82 percent of the PM2.5 particles in the atmosphere over Korea from Jan. 11 to 15 were found to have come in from abroad, including from China, Mongolia and North Korea. It said the daily average was 75 percent.

“We found that most of these pollutants had flown into the country, once on Jan. 11 and then again on Jan. 13,” a NIER official told the JoongAng Ilbo.

NIER added that it also concluded some of the fine-dust particles flew in from China and Mongolia because it analyzed satellite images to determine the aerosol optical depth, or how much sunlight was blocked due to dust and haze in the atmosphere over the Yellow Sea.

“The heavy levels of fine-dust particles in the air during this time were due to worsening air quality in both South Korea and China and stagnant air,” NIER said in its statement. “We will be sharing our analysis with stakeholders in China with the intention to strengthen bilateral cooperation on research on fine dust.”

The Korean Environment Ministry plans to hold meetings with the Chinese government on Feb. 20 to discuss pooling resources on fine-dust research to establish a joint fine-dust warning system.