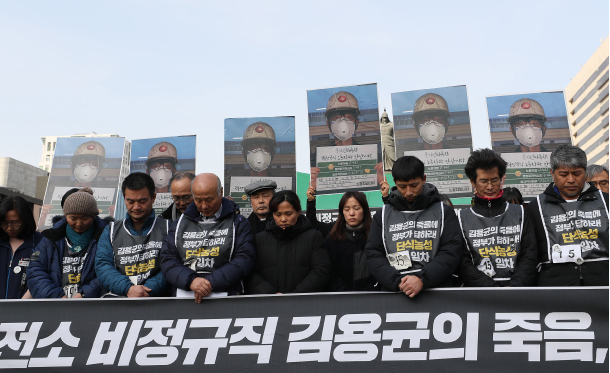 Relatives and members of a civic group pay silent tribute Tuesday at a mourning altar set up in Gwanghwamun Square, central Seoul, for the late Kim Yong-gyun, a contract worker who was killed in a thermal power plant on Dec. 11 last year. Earlier in the day, the group made a deal with the government and the ruling party that a special investigation will be launched to find out the root cause of the accident.

The party made the announcement at the National Assembly Tuesday, though it did not specify a timeline for the plan, nor how exactly the public company will be funded.

According to the Ministry of Trade, Industry and Energy, 2,266 people are contracted by five major corporations, including the Korea Electric Power Industrial Development and the Korea Engineering & Power Services (KEPS), to work as fuel supply operators at power plants throughout the country.

Kim worked for KEPS. He was found dead at a power plant in Taean County, South Chungcheong, on Dec. 11 last year, crushed by a steel conveyer belt.

He was the sole inspector checking operations of the plant the night he died. In his backpack, authorities found a flashlight he bought for himself, batteries and cup noodles - all of them covered in coal dust. The cup noodles were needed to fill his empty stomach as he worked a shift that began at 7 p.m. and ended at 7 a.m.

A public uproar ensued after news of Kim’s death was reported on Dec. 11. Labor unions, civic groups, religious leaders and others demanded that safety measures for industrial workers be strengthened.

On Dec. 27, the National Assembly passed a bill that bans companies from outsourcing hazardous jobs to contractors. The bill outlaws companies from contracting other firms for tasks that are classified as dangerous and guarantees employees the right to stop working if they face risks to their safety.

In announcing the plan to start a public company to hire the 2,266 outsourced fuel supply operators at power plants full-time, the DP did not specify any salary range for the workers.

But it did add that a special committee will be established by the government to investigate Kim’s death, a request forwarded by a civic group and Kim’s relatives. The committee will release its findings by June 30.

“These are just baby steps, but we are happy to hear that the contracted workers will be hired full-time,” a civic group member said at a press conference in Gwanghwamun Square, in central Seoul, Tuesday.

The civic group and relatives, including Kim’s mother, have been staging a hunger strike at the square since Jan. 22. They demanded the government investigate Kim’s death.

After the DP’s announcement Tuesday, the group decided to end their strike and hold Kim’s funeral, which had been postponed, from Thursday to Saturday.

“I am thankful to all who have helped my son not die in vain,” Kim’s mother, Kim Mi-sook, said at the press conference. “Please pay attention to the case until we find out the facts of the incident and punish those responsible.”