Led by setter Han Sun-soo, the Incheon Korean Air Jumbos stepped up to second place in the KOVO ranking this week. 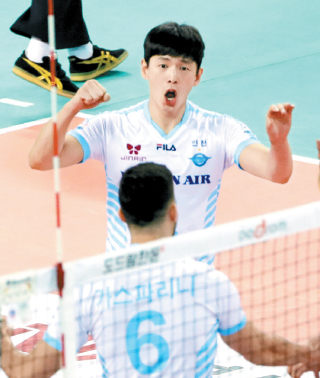 Han Sun-soo of the Incheon Korean Air Jumbos celebrates after winning a point during a KOVO match. [ILGAN SPORTS]

With a 3-0 sweep win against the Seoul Woori Card Wibee at Jangchung Arena in Seoul Wednesday, the Jumbos are now only one point behind the Cheonan Hyundai Capital Skywalkers, at 18 wins and 10 losses.

The Wibee were first to take the lead at 16-11 during the first set. Once the Jumbos’ spikers Jung Ji-seok left the court due to an elbow injury and Mitja Gasparini began struggling, Han made the quick choice to set the ball to Kwak Seung-suk. The decision was smart, as the Jumbos won six straight points to win the first set 25-23.

As the Wibee failed to make a comeback from their loss in the first set, the Jumbos took the advantage and picked up a win by winning the next two sets.

“We struggled in the beginning, so we tried to focus on one play at a time,” Han said. “In our last match, Seung-suk’s attack kept on getting caught by the opposing team, so we watched the clips and worked on what we needed to work on.”

When Han first joined the Jumbos in 2007, he was the team’s third setter, and wasn’t even at a level to play in practice games. But through practice and coaching, he slowly made his way up to be the team’s captain and the starting setter.

With Han’s performance, the Jumbos finally won the Championship series last season and he became a free agent (FA). As Han successfully finished his last season, the Jumbos re-signed Han as an FA at 650 million won ($578,558), making him the highest-paid player in the KOVO. The previous record had also been set by Han, where he was the highest-paid player in the league when he at 500 million won during the 2015-16 season.

Although Han, 34, is the KOVO’s oldest setter, along with Yoo Kwnag-woo of the Wibee, he is dominant on the court.