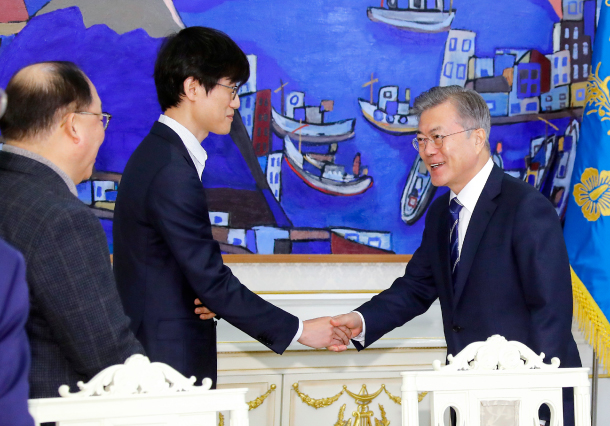 President Moon Jae-in said Korea’s anti-corporate sentiment will be resolved in the near future as companies’ managements become more transparent.

“Anti-corporate sentiment seemed to have been rooted in the consciousness of the people, because in the early years, many that built their wealth used unjust means,” Moon said at the Blue House Thursday. “I believe an improvement in the people’s attitudes towards businesses will change soon.”

On Thursday, Moon invited the founders and heads of seven innovative companies to the Blue House where he once again pitched his notion of “inclusive innovative growth,” an economic theme he has been stressing since the beginning of this year.

During the meeting, heads of the companies raised concerns about anti-market government policies, the Korean government’s policies against Korean companies as well as government regulations that prevent businesses from expanding, including attracting foreign investments.

“I hope our government will become smarter.”

“I’m not saying we aren’t going to pay, but at least the same rules should equally be applied to Korean companies and foreign companies,” he said.

“In order to create unicorn companies [start-ups whose value exceeds $1 billion], foreign investments are needed,” said Kim of Coupang. “But the biggest problem that prevents foreign investment is uncertainty.”

He said the depth and interpretation of regulations change too often.

“Korea is a country where its people have high levels of education and consumers quickly accept new products, which makes Korea a market with huge potential,” Kim said. “We all have to work in order to minimize the uncertainty.”

Lee also criticized on government’s shortening of the legal workweek.

“I understand the purpose of the 52-hour workweek,” Lee said. “But for companies that are growing rapidly, it is just another regulation.”

The invitation by Moon was the first in a month since he invited heads of small- and medium-sized enterprises and start-ups to the Blue House.

“Our government has promised an innovative, inclusive country and is looking for innovative growth for the main engine [of our economy’s] growth,” Moon said. “In order to achieve this goal, there’s a need to boost the start-up ecosystem so that innovative start-ups could grow into larger companies and then unicorn companies and eventually into conglomerates.”