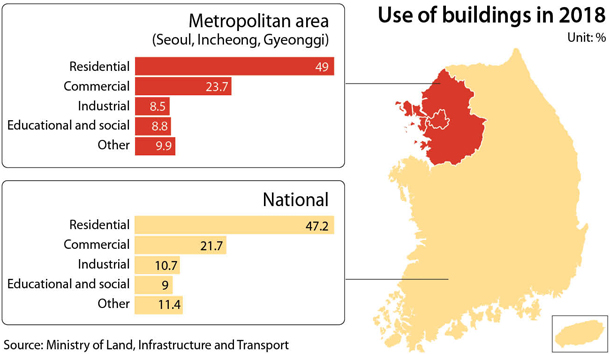 The total number of buildings last year increased 0.9 percent, while the total floor area in the country was up 3.1 percent. More than one third of buildings nationwide are more than 30 years old, with many of the older structures outside the Seoul area.

According to the Ministry of Land, Infrastructure and Transport on Thursday, the country had 7.19 million buildings in 2018, 65,386 more than a year earlier. Floor area totaled 3.75 billion square meters, up 112.2 million square meters year-on-year.

In the greater Seoul area, commercial space grew 4.1 percent, followed by residential space, up 3.2 percent. Cultural, education and social space was up 2.1 percent, while industrial was up 0.3 percent.

The ministry said last year nearly 2.67 million buildings were more than 30 years old, which is 37.1 percent of all buildings.

In regions outside the capital, the ratio was 40.8 percent.

In Seoul, Gyeonggi and Incheon, the ratio was 27.5 percent. Those in that area built 20 to 30 years ago amounted to 21.1 percent of the total.

Last year, 70,257 buildings were demolished, a 2.9-percent decline compared to those demolished in 2017. In Seoul, the number of demolished buildings declined 9 percent.

Lotte World Tower in Jamsil was the tallest building, at 555 meters tall and 123 stories. The country has 107 buildings that are 50 stories high or higher, up four from 2017.

This year, two more are expected to be added on the list: Two skyscrapers that are 100 stories high are scheduled for completion in Busan.