Music, videos, social media, movies and now web comics: K-pop’s biggest boy band BTS has found yet another way to interact with their fans with a new series of web comics titled “Save Me: The Most Beautiful Moment in Life.”

The webtoon series was released Jan. 17 on Naver Webtoon in seven regions, and has since released new episodes every Thursday for free - plus an additional two episodes that people can see in advance for a price.

The title of the comic series will immediately ring a bell for BTS fans. “The Most Beautiful Moment in Life” is the title of the septet’s two-part EP series which was released in 2015. As the band’s third EP, the albums were themed around the boys’ maturity; both the joy and despair young people feel when they realize they are no longer children and must face the world on their own.

“Save Me” is the name of a track that was added to the project’s final compilation album, titled “The Most Beautiful Moment in Life: Young Forever” (2016). 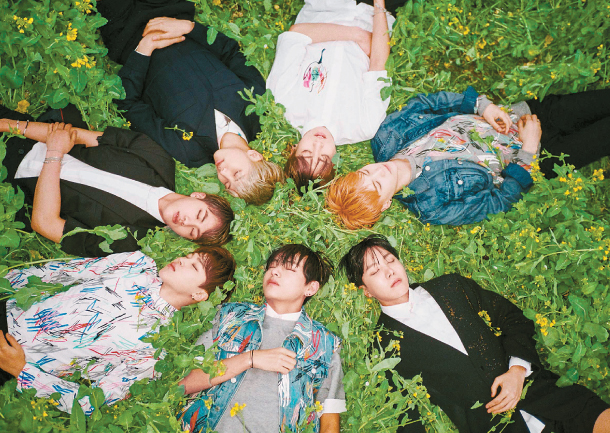 The story of the webtoon is a follow-up to the band’s 2015 album of the same title. [BIG HIT ENTERTAINMENT]

Unlike the two recent BTS concert movies, “Burn the Stage: The Movie” (2018) or “Love Yourself in Seoul” (2019), which took local cinemas by storm, the web comic isn’t a documentary or a behind-the-scenes look.

To the contrary, “Save Me” is a fantasy drama that revolves around seven characters, based on the members of BTS members, in their early 20s.

The story begins with Seok-jin, who has recently returned after two years in the United States. He runs into high school friends on the street, but fails to say hello because of the long time it has been since they have seen one another.

Yet after learning that Nam-joon has been imprisoned for assaulting a customer at a gas station and Tae-hyung was named a suspect in his father’s death, Seok-jin gets caught in a time loop and must help find the other members and save them from their unfortunate fates.

The somewhat eerie story is actually an explanation of the band’s concept during “The Most Beautiful Moment in Life” album series. The so-called “BTS Universe” began with the 2015 albums and penetrates through the other album concepts. 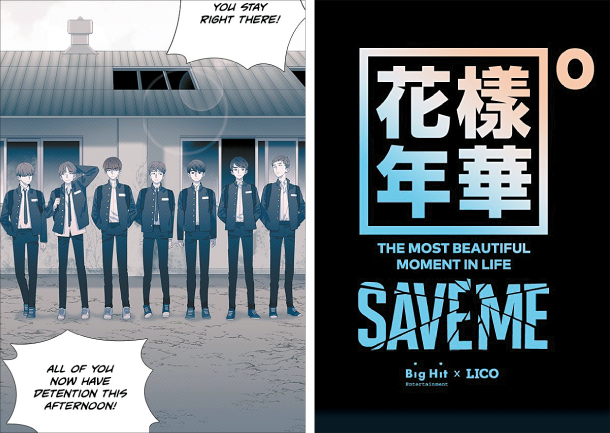 “Save Me: The Most Beautiful Moment in Life,” above right, is a new webtoon series by Naver, which revolves around seven characters. The characters, above left, are based on the members of the group. [SCREEN CAPTURE]

Clues have been scattered throughout many tracks and music videos like pieces of a puzzle, and Big Hit Entertainment took the opportunity to put it all in a single story for fans to enjoy. Naver provides the web comic in a number of languages, such as English, on Line Webtoon.

Outside of the web comic, there will be more new BTS products coming out in the near future. A book titled “The Most Beautiful Moment in Life: The Notes 1” will be released on March 5, which will tell a story similar to the web comic’s but in the form of diary entries written by each of the members.

The book, which began pre-order sales in January, will be released in three languages: Korean, English and Japanese.

Though the exact date has not yet been revealed, game developer Netmarble will release a mobile game, titled “BTS World,” in the coming months. It is said to be a simulation game that will allow fans to guide the members as a manager would and help them grow into bigger stars. The game will feature realistic graphics, including nearly 10,000 photographs of the boys and over 100 videos throughout the game.

“BTS is not the first group to release products through various outlets, but they are definitely doing it better than anyone else,” said K-pop critic Mimyo.

“Some entertainment agencies just release anything without thinking much because they know fans are going to buy whatever they can that is related to their favorite group. But with BTS, you can see that they’ve actually thought hard about what stories can be told through different formats.”

“K-pop groups have started to debut with their own ‘universe,’ meaning that they create a separate persona for the members on the stage. If the agencies are able to create more content using this method and provide fans with enough products, then perhaps there will be less problems regarding privacy infringement of individual celebrities,” the critic added.