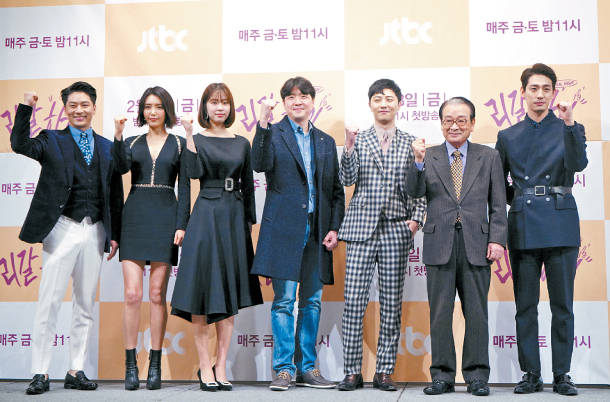 Veteran lawyer Go Tae-rim is obsessed with winning. For a cost, he will ensure to come out the victor of any case brought to him. Yet Seo Jae-in, an up-and-coming lawyer, believes otherwise. Although she barely passed the law exam, she is one of the few people who believes that the law is about seeking justice.

An adaptation of a hit 2012 Japanese television series of the same title, JTBC’s “Legal High” portrays the reality of the Korean law system through the two contrasting characters in a comedic way.

However, many worry that the remake will not meet fans of the original series’ expectations. Perhaps to avoid comparisons, director Kim Jung-hyun has stressed the two shows are very different.

“The original show was a masterpiece, but many elements in the original series were different from [what they are] in Korea. Our show conveys the realities of Korean law.”

In the series, actor Jin Goo plays the role of Go. After his role in the hit KBS2 series “Descendants of the Sun” (2016), he has only played serious roles. But as a fan of the original, he felt he had to take the “Legal High” role.

“When I heard that they were doing a remake of this series, I wanted to take whatever role there was available,” he said. “[After I was cast,] I became ambitious about playing my character in a comic way.”

“Seo is more active, bright and energetic,” she explained.

Hoping to produce another masterpiece, the actors have been pulling all-nighters with the director, reading and practicing the script.

“I’m not lying; we gather together every day to read our scripts and discuss the show,” said Kim.