Samsung is top buyer of chips, top seller as well

Samsung is top buyer of chips, top seller as well

Samsung Electronics was the largest semiconductor buyer for two years in a row as of 2018, according to market research company Gartner. 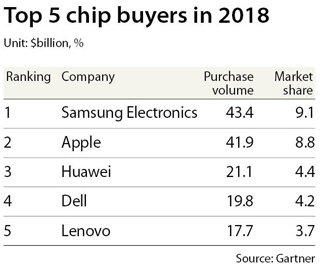 Last year, Samsung purchased $43.4 billion worth of chips. This represented 9.1 percent of all chip purchases made in 2018, according to Gartner on Jan. 4. It was also a 7.5-percent increase over 2017.

Last month, Gartner also announced Samsung was the largest vendor of semiconductors for the same two consecutive years. Samsung has three major business sectors: chip making, mobile devices and home electronics. Samsung and Apple increased their purchases of chips in 2018 from 2017, but saw their combined share among the top 10 buyers fall 1.6 percent during the same period. Chinese companies increased their purchases. “Four Chinese original equipment manufacturers (OEMs) - Huawei, Lenovo, BBK Electronics and Xiaomi - ranked in the top 10 in 2018, up from three in 2017,” said Masatsune Yamaji, senior principal analyst at Gartner. “On the other hand, Samsung Electronics and Apple both significantly slowed the growth of their chip spending in 2018.”

Huawei climbed two ranks to be the third largest chip buyer in 2018, pushing down U.S. manufacturer Dell to fourth place. Huawei’s total spending on semiconductors was $21.1 billion, a far cry from No. 2 Apple’s $41.9 billion. But its spending on chips nearly doubled in 2018 with a growth rate of 45.2 percent.

Another Chinese company, Xiaomi, rose eight ranks to become the 10th largest buyer with the highest year-on-year growth rate of 62.8 percent. The Chinese brand and California-based Kingston Technology were newcomers to the top 10, pushing out LG Electronics and Sony.