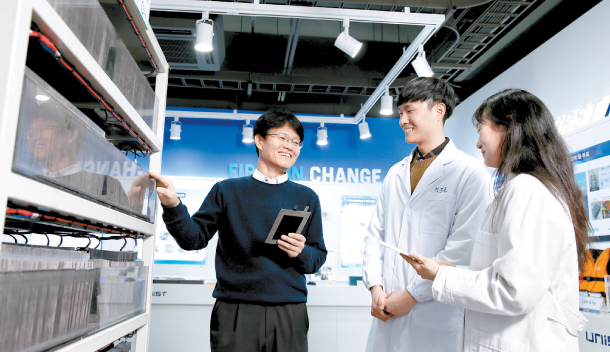 Kim Young-sik, a professor of energy and chemical engineering at the Ulsan National Institute of Science and Technology who invented the seawater battery, talks to the researchers. [UNIST]

A buoy off the coast 10 kilometers (6.2 miles) from Incheon emits a red light 24 hours a day, seven days a week. The main purpose of the buoy and others in the area is to warn passing ships of underwater dangers.

Yet none of these devices are connected to an external power source.

They get their energy from seawater, utilizing a battery invented by the School of Energy and Chemical Engineering at the Ulsan National Institute of Science and Technology (Unist).

The battery has been under development for commercialization since 2017.

Unist is working with Korea Electric Power and Korea East-West Power on the project with 5 billion won ($4.47 million) of funding, and the team is led by Kim Young-sik, a professor at Unist’s School of Energy and Chemical Engineering.

The technology has already been tested for products that work in the water and for power plants that produce and store electricity.

The main advantage of the seawater battery is low production cost. Lithium accounts for only 0.02 percent of earth’s crust, and lithium salt has been used as an electrolyte in batteries for years.

The element is becoming increasingly expensive. The price of lithium jumped more than three-fold over the past last year.

Seawater batteries utilize seawater, and the ocean covers 70 percent of the earth’s surface. The production cost of seawater batteries is half that of batteries made from lithium, says Kim. It’s also more eco-friendly.

“Seawater batteries produce electricity with salt as the negative pole and water as the positive pole,” said Kim. “After saving the electricity, the water is released back into the sea desalinated.”

He also added that seawater batteries can control heat by itself, so there is less danger of them catching fire.

The government is working to develop eco-friendly batteries and establish energy storage systems (ESS) using materials other than lithium. A number of lithium-based ESSs in the country caught fire last year, raising questions about safety.

Another advantage is that seawater batteries can store electricity for use on demand.

“The problem with most renewable energy is that it can only immediately supply electric power,” said Kim. “So they’re not adequate to be commercialized for ESSs that should be able to save leftover electricity for later consumption.”

He added that even overseas leftover electricity is discarded, which means there may be a huge potential for seawater batteries.

According to Navigant Research, the global ESS market is estimated to grow to as large as 58.6 trillion won in 2020. Seawater batteries may also be useful for a handful of marine applications, including those related to the military.

“We are planning to use seawater batteries on Autonomous Underwater Vehicles and Unmanned Surface Vehicles currently manufactured for military purposes,” said Baek Seung-jae, who heads the research center for marine ICT technology at the Korea Institute of Ocean Science & Technology.

“The local government of Ulsan is planning to establish a floating offshore wind power plant and invest 6 trillion won,” added Baek. “Waterproof is important for ESSs powered by floating wind-power turbines. Seawater batteries are appropriate for projects like this.”

On Jan. 30, Korea East-West Power announced that, in cooperation with Unist, it will make 800 buoys for use on fishing nets powered by solar energy. They will provide them to 400 local fishermen.